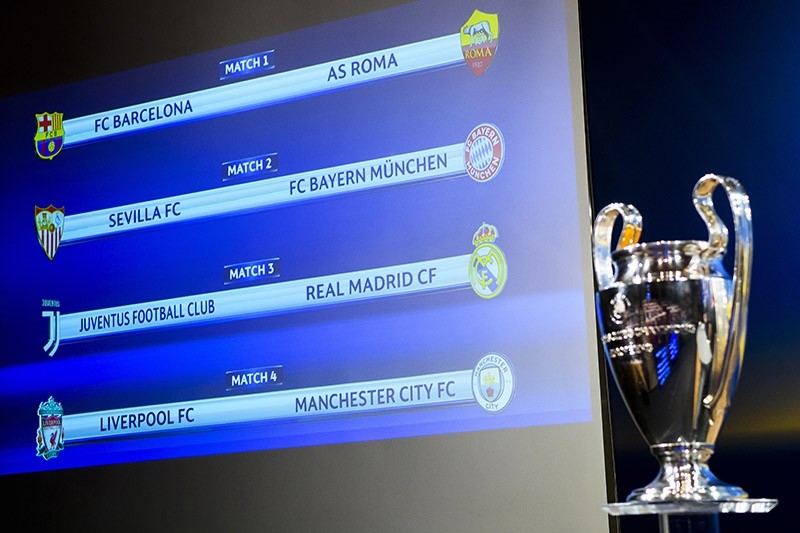 Juventus were given a chance to avenge last year's Champions League final defeat by Real Madrid when the two sides were drawn together for the quarter-finals of this year's competition on Friday. In the other ties, Barcelona will face AS Roma, bringing back unhappy memories for the Italian side who lost 6-1 on their last visit to Nou Camp in November 2015, and Sevilla, who beat Manchester United in the last round, will take on Bayern Munich.

The last eight also produced an all English pairing as Premier League leaders Manchester City were drawn against Liverpool, the only team to have beaten Pep Guardiola's side in the league this season.

Juventus, who will host the first leg, were thumped 4-1 by Real in last season's final in Cardiff, although the Turin side came out on top when they last met over two legs, in the semi-finals in 2015. Overall, the teams have faced each other 19 times with eight wins for Juve, nine for Real - including the 1998 final - and two draws. Liverpool's tie against Manchester City will be the first meeting between English sides in the quarter-finals since 2010/11 when Chelsea faced Manchester United. City have won only one of their last eight meetings with Liverpool in all competitions, if you exclude their penalty shootout triumph in the 2016 League Cup final. Former Roma stalwart Francesco Totti said his former team, who are considered the outsiders alongside Sevilla, should not be worried about facing Barca.

"Football is beautiful because anything can happen, especially in these type of games," he said. "We've already come a long way, finishing ahead of Chelsea and Atletico Madrid in the group stage and knocking out Shakhtar Donetsk."

Bayern, the runaway Bundesliga leaders, promised they would not underestimate Sevilla.

"It certainly is no easy draw, they did not come through to this stage by accident," added midfielder David Alaba.

The first legs will be played on April 3/4 with the return matches one week later.