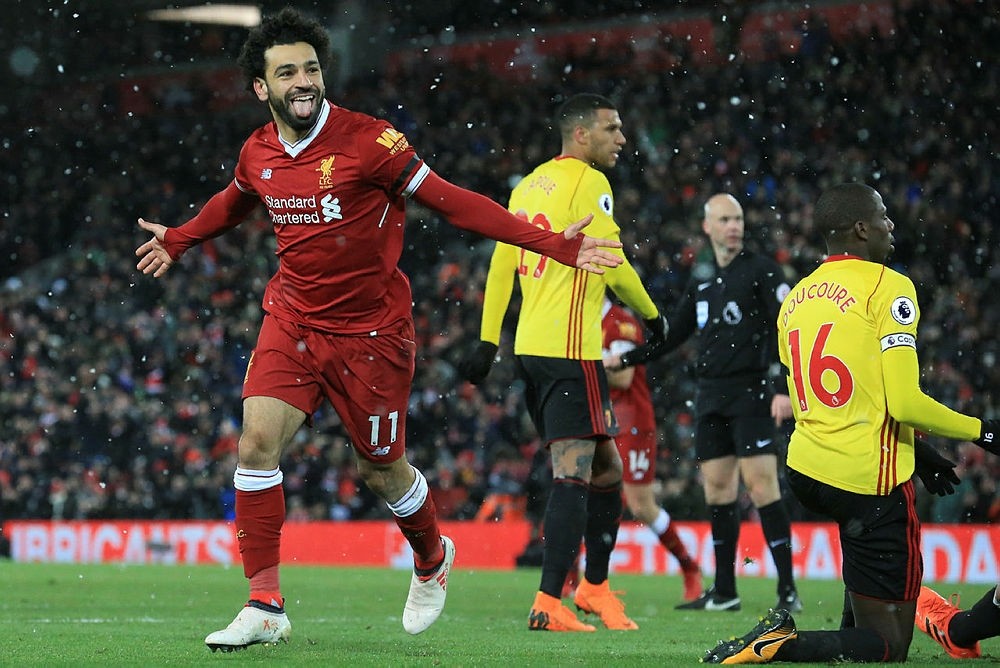 Liverpool manager Jurgen Klopp hailed Mohamed Salah's "fantastic" four goals as the Egyptian netted his first hat-trick for the club in a 5-0 thrashing of Watford at Anfield on Saturday.

However, Klopp admitted he can now only wait and hope his key men, including Salah, return safely from two weeks of international duty ahead of a huge month for Liverpool.

Victory moved Klopp's men back above Tottenham Hotspur into third in the Premier League as they moved a step closer to securing Champions League football next season via a top-four finish.

"For Mo to be involved in five goals is fantastic but to score four is even more fantastic," said Klopp.

"His goals are so important for us. We have to hope they all come back well from the internationals."

Not only did Salah net four times himself to take a commanding lead in the race for the league's golden boot by moving four clear of Harry Kane on 28 goals, he also set up Roberto Firmino for Liverpool's third.

"Each game we try to win the three points, but every game I want to score and help the team," said Salah, who scored with each of his four shots on target.

Watford arrived at Anfield having lost seven of their past eight away games in the Premier League, and never looked likely to avoid another defeat after conceding just four minutes in.

In less than hospitable conditions as swirling snow and a freezing wind blew through Anfield, the Liverpool fans at least had Salah to warm their spirits as he took his tally for an amazing debut season at Liverpool to 36 in all competitions.

Salah jinked his way past the helpless Jose Holebas before slotting past Orestis Karnezis on his weaker right foot to get Liverpool off to the perfect start.

The only negative of a comfortable afternoon for Liverpool was the sight of Emre Can hobbling off with a hip injury before half-time, but the German's absence didn't disrupt their attacking rhythm.

Shortly before half-time Klopp's men doubled their lead with a stunning team goal as Andy Robertson delivered an inch-perfect cross to Salah inside the six-yard box and he easily clipped home his second of the evening.

"The goals we scored were unbelievably good, and the boys didn't stop," added Klopp. "That's how football should be, so I'm really happy with the performance."

Straight after the break, Liverpool went for Watford's jugular and made it 3-0 as Salah worked hard to stop the ball from running out of play before crossing for Firmino who wonderfully backheeled past Karnezis.

Watford did come within inches of a consolation when Roberto Pereyra smashed a free-kick against the crossbar.

Instead, it was Liverpool, and Salah in particular, who finished as strongly as he started.

Salah made it 4-0 with 13 minutes remaining as he somehow managed to slide the ball past Karnezis after skipping round three desperate Watford challenges.

And he capped off a brilliant personal performance in the dying seconds, thrashing into the roof of the net after Karnezis had fumbled Danny Ings' shot.