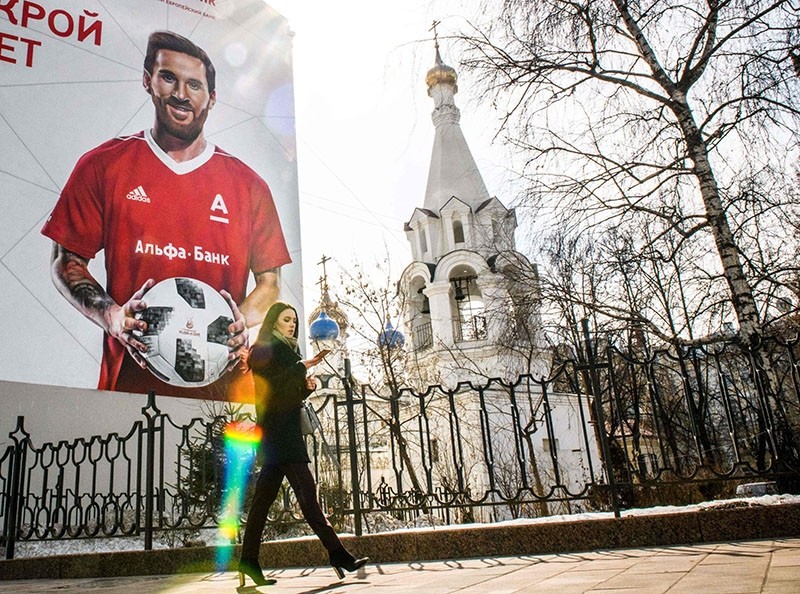 A woman walks past a wall painted with an advert for a local bank featuring Argentinian forward Lionel Messi ahead of the 2018 FIFA World Cup football tournament on April 4, 2018 in downtown Moscow. (AFP Photo)
by Apr 04, 2018 12:00 am

Russia World Cup organizers are more worried about Moscow's latest diplomatic standoff with the West than stadiums being completed on time, a report said Wednesday.

The nerve agent attack in England sparked mass expulsions and a decision by Britain and a few of its allies not to send officials to the June 14 opening ceremony.

"Our main problem rests abroad -- not with infrastructure," Sorokin said.

"Any incident, whether it occurred naturally or was created artificially, is being used to put pressure on World Cup organizers."

Sorokin said he was confident there is "nothing we cannot finish on time" as organizers race to complete six new stadiums, while airports are still being upgraded and roads built in many of the 11 host cities.

But he believes Moscow's critics are trying to use the fallout surrounding the poisoning of Skripal to drive down attendances at Russian President Vladimir Putin's prestige event.

"I think the intention was there, but it is not working," said Sorokin.

Moscow and London have been trading diplomatic barbs almost daily since Skripal and his daughter Yulia fell ill in Salisbury on March 4.

Britain accuses Russia of poisoning Skripal in retribution for passing on state secrets to London.

Russia's foreign intelligence chief Sergei Naryshkin on Wednesday called it a "grotesque provocation" concocted by UK and US security services.

Yet sales in England have been atypically weak.

England accounted for less than one percent of that figure and have purchased just 31,000 tickets so far.

Concerns have been compounded by an attack by hundreds of Russian hooligans on English fans in the French port of Marseille during Euro 2016.

"We explained everything to them in detail," said Sorokin.

But he added that no extra security measures for either the England team or its fans were planned.

"Each team will be receive equal, full protection," Sorokin added.