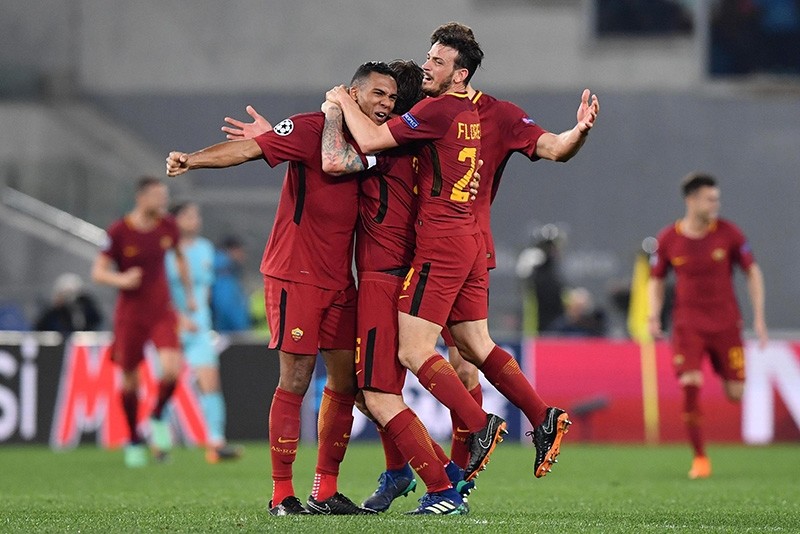 Roma's players celebrate their win at the end of the UEFA Champions League quarter final second leg match between AS Roma and FC Barcelona at Olimpico stadium in Rome, Italy, 10 April 2018. (EPA Photo)
by German Press Agency - DPA
Apr 11, 2018 12:00 am

Roma sent favorites Barcelona crashing out of the Champions League with a sensational 3-0 win on Tuesday to reach the last four, while Liverpool clinched a semifinal place with a 2-1 victory at Manchester City.

Edin Dzeko, Daniele De Rossi from the penalty spot and Kostas Manolas with a header in the 82nd minute gave Roma a famous victory to send the Serie A side through on away goals after Barcelona won 4-1 at home in the first leg last week.

Mohamed Salah's remarkable run of goals meanwhile continued to help send Liverpool into the last four as Juergen Klopp's side came from behind for a 2-1 win at Premier League rivals Manchester City and a 5-1 aggregate triumph.

Roma achieved a memorable comeback when they overturned a 4-1 deficit from the first leg while keeping Lionel Messi quiet in the Olympic Stadium to put one of the big tournament favorites out and reach the last four for the first time.

Barca fell behind in the sixth minute when Daniele De Rossi found Edin Dzeko for the striker to control the ball with one touch and finish with his second.

De Rossi then converted from the penalty spot in the 58th minute after Gerard Pique brought down Dzeko in the box, and Manolas send the home crowd into raptures with a glancing near-post header eight minutes from a spectacular triumph.

In Manchester, Egypt striker Salah struck with a neat left-foot chip in the 56th minute to stun City who dominated the first half and led from an early goal, but had manager Pep Guardiola sent to the stands as the teams came off at the break.

Roberto Firmino then struck a 77th-minute winner in off the post after Nicolas Otamendi failed to clear on the right to send another of the competition's top favorites out.

City, 3-0 down from a week ago at Anfield, got the early goal they were looking for when Raheem Sterling robbed Virgil van Dijk - with more than a hint of a shove - near the touchline in the second minute and found Gabriel Jesus to finish.

City piled on the pressure with Liverpool hardly able to get out of their own half, and Bernardo Silva hit the post before Leroy Sane thought he'd scored but was ruled offside.

Guardiola was sent from the touchline by referee and fellow Spaniard Antonio Mateu Lahoz as he vented his anger towards the official as the players came off at half-time.

Guardiola could then only watch from the stands as Salah chipped in after Sadio Mane was bundled off the ball for the his 39th goal this season, and had his head in his hands when Firmino struck again.