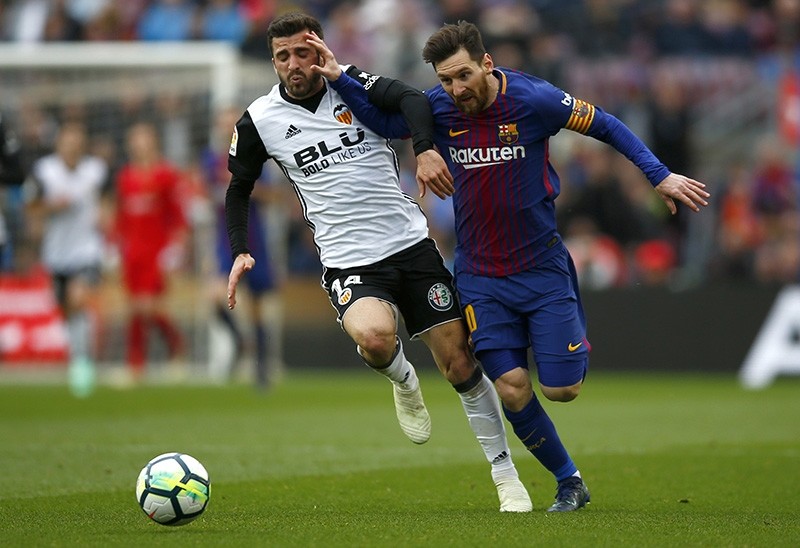 Barcelona set a new La Liga record by extending their unbeaten run to 39 games with a 2-1 victory over Valencia on Saturday.

Luis Suarez and Samuel Umtiti were both on target as Barca passed the 38 matches Real Sociedad managed without defeat between 1979 and 1980. Dani Parejo gave Valencia brief hope with an 87th-minute penalty.

The win at the Camp Nou, which was more comfortable than the scoreline suggested, also eases fears that Tuesday's Champions League collapse against Roma could affect Barcelona's march to the league title.

Ernesto Valverde's side are now 14 points clear at the top of the table, before second-placed Atletico Madrid play their game in hand against Levante on Sunday.

Valencia stay third, one point ahead of Real Madrid, who are also in action on Sunday, away to Malaga.

There is no doubt Barca's shock defeat in Italy still lingers, and may still, even if the Catalans secure the first part of an expected domestic double by winning the Copa del Rey next weekend.

But it should take little away from their faultless form in the league, which means the last time they tasted defeat outside a cup competition was against Malaga just over 12 months ago.

This was already a club record run, now eight games better than the 31 unbeaten Pep Guardiola's brilliant team strung together in the season of 2010-11.

It would now seem only the home Clasico against Real Madrid on May 6, and perhaps an awkward trip to Celta Vigo on Tuesday, stand in the way of Barcelona finishing the league campaign as invincibles.

Despite their exertions in Rome, Valverde resisted the temptation to rest key players, with Philippe Coutinho and Paulinho coming in for Ivan Rakitic and Nelson Semedo.

Barca showed few signs of lost confidence early on and after 15 minutes they took the lead, Coutinho drifting in from the right and, after spotting Suarez's angled run, poking a superb pass in behind. Suarez took the finish first time and swept the ball inside the near post.

Valencia, however, found a foothold and arguably were the better side by the end of the half.

Pique, already booked, endured a difficult 45 minutes and as he and Marc-Andre ter Stegen dallied at the back and the latter's skewed pass fell to Carlos Soler. Soler played in Rodrigo Moreno but Ter Stegen made up for his mistake by pushing the shot onto the bar.

Barcelona started the second half like they began the first though and five minutes after the restart, they doubled their advantage.

Umtiti beat Gabriel Paulista to Coutinho's corner and while his header was parried by Neto, Valencia's goalkeeper could only push it in off the post.

Valencia's belief was dwindling and two acrobatic volleys, from Lionel Messi and then Andres Iniesta, almost added a spectacular third, as the first flew just over and the second was parried by Neto.

There was time for a tense finish after substitute Ousmane Dembele brought down Jose Gaya in the area and Parejo's feeble penalty squirmed under the body of Ter Stegen. But Barca's morale-boosting win was never really in doubt.