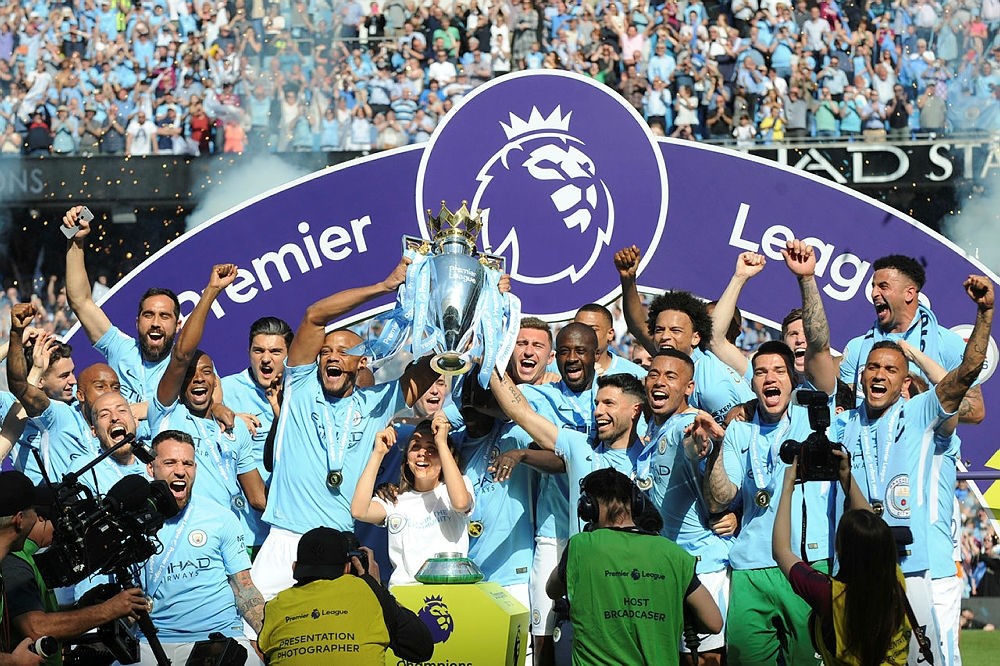 Manchester City players lift the English Premier League trophy after the soccer match between Manchester City and Huddersfield Town at Etihad stadium in Manchester, England, Sunday, May 6, 2018. (AP Photo)
by Compiled from Wire Services May 06, 2018 12:00 am

Manchester City were officially crowned the Premier League champions after its players lifted the competition's famous trophy following a 0-0 draw with relegation-threatened Huddersfield on Sunday.

The result meant City must wait to break a slew of Premier League records, with the champions still needing two points, one win and two goals to set milestones in a season when Pep Guardiola's side cruised to the title.

The draw was more important to Huddersfield, which moved three points clear of the relegation zone with two games to play — against Chelsea and Arsenal.

City last failed to score a goal in a league game at Etihad Stadium in April last year, in a 0-0 draw against Manchester United. City was held to a goalless draw by Wolverhampton Wanderers in the League Cup this season, before winning a penalty shootout.

City's players came out to a guard of honor made up of the Huddersfield team as well as players from City's title-winning team from 1968.

On a sunny day, there was a party feel inside and outside the Etihad and City produced one of its sloppiest displays of the season, with its final ball lacking and striker Gabriel Jesus barely getting a chance at goal.

In fact, Huddersfield had the better chances — through Chris Lowe and Florent Hadergjonaj in the first half — before defending deeply and obdurately after halftime.

"England is a special place and is so tough," the team's coach Pep Guardiola told Sky Sports.

"Today we saw it. You never know if you are going to win, but I had no doubt what I had to do. You win or lose, you have to try and do what you believe. Today was proof we can do better. We lost a bit of focus, but that is normal. To make back-to-back titles in this league will be tough, but we accept the challenge."

The celebrations for City's third title in seven seasons began well before kick-off, both inside and outside the Etihad.

Supporters were issued with blue and white flags to greet the champions as they were given yet another guard of honor on their way onto the field before kick-off.