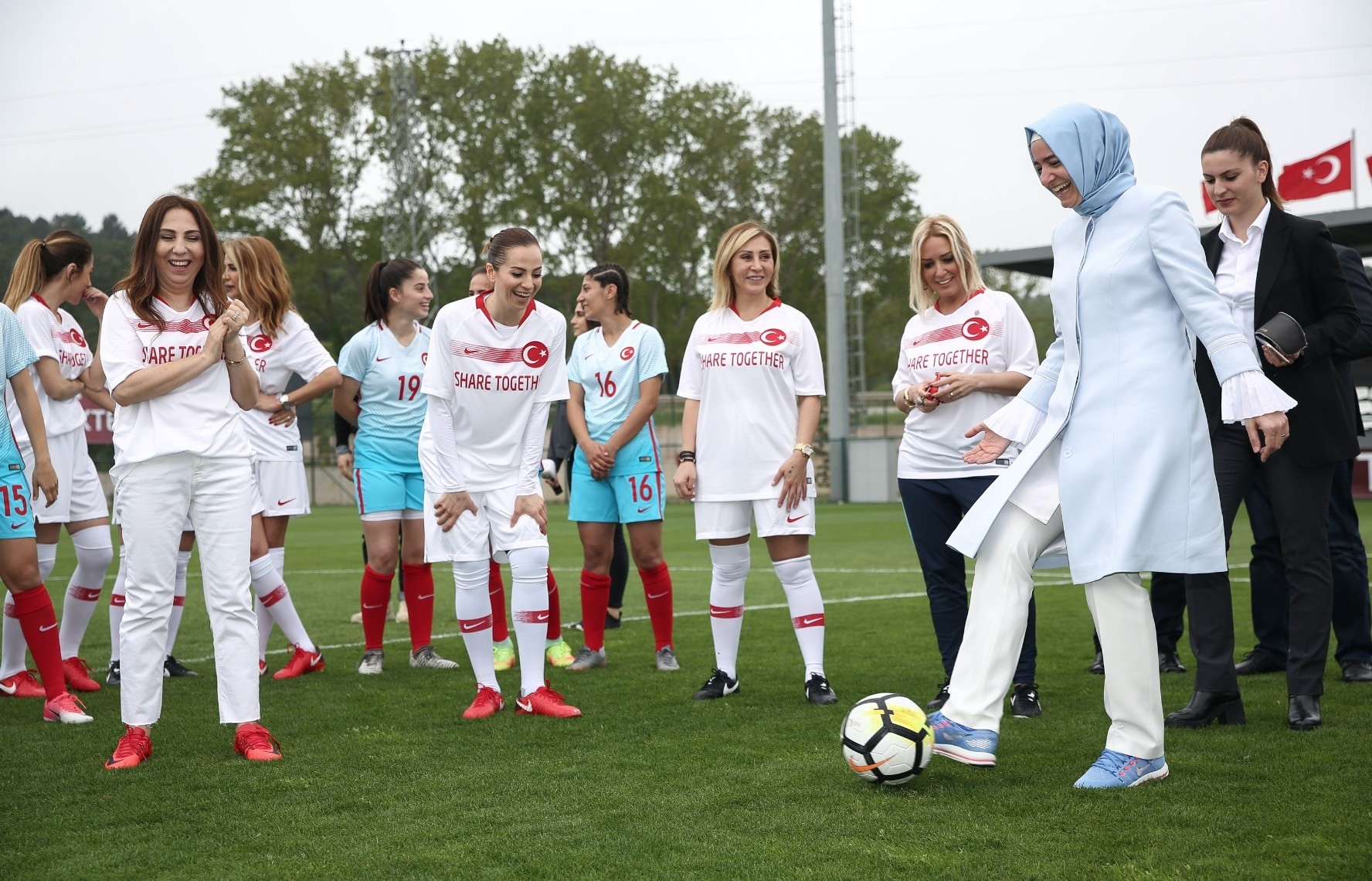 Family and Social Affairs Minister Fatma Betu00fcl Sayan Kaya kicked off the match between the womenu2019s national football team and a team of celebrities, May 6.
by Daily Sabah with AA May 07, 2018 12:00 am

Turkey's candidacy to host UEFA Euro 2024 was under the spotlight at a promotional event held at Istanbul's Hasan Doğan National Teams Camping and Training Facilities Saturday.

Speaking at a press conference ahead of the event, Family and Social Affairs Minister Fatma Betül Sayan Kaya said Turkey was ready for the tournament thanks to its strong economy, historic and cultural values, football infrastructure and passion. The Turkish Football Federation (TFF) submitted its bid to host UEFA Euro 2024 last week.

Kaya thanked the women's national football team and a team of celebrities who participated in the friendly match.

"Sport is an important tool which empowers peace, brotherhood and sisterhood while bringing people and societies closer. Football is a very popular sports branch both in our country and the world. It is a platform that brings the masses together. At the same time, it is a power that unites our society. The different colors of our society unite in their teams' colors. We, as a nation, unite for our national team," the minister said.

"Turkey has transformed in the last 16 years in many fields. We improved the country's football infrastructure and increased the number of stadiums that comply with international standards. Turkey hosted a lot of important international events," she added.

"Our president has given the top level assurances for Turkey's Euro 2024 bid. We, as a government, are working incessantly to organize the tournament in our country. We are competing with Germany to be the host country. And we, as women, will succeed. I believe that we can crown our 2023 (the Republic's 100th anniversary) vision by hosting the Euro 2024."

Minister Kaya stressed that sports can overcome prejudices. "That's why it is important for us to hold this event in our country. It will contribute to our political and economic relations. I believe such an event in Turkey is also important for Europe. We must express ourselves very well to our European partners in this process. Turkey is ready for the tournament thanks to its strong economy, historic and cultural values, football infrastructure and passion."

"We, as Turkish women, are also ready to contribute to the bid for Euro 2024," she said. On the same note, TFF President Yıldırım Demirören's wife Revna Demirören said: "Women can succeed in anything they want. I, as a woman, say it proudly that a lot of women are working in important branches of the TFF. Our women specialists worked really hard on the UEFA Euro 2024 bidding file that we delivered on April 26."

After the speeches, a video on Turkey's candidacy for Euro 2024 was displayed.

A Turkish delegation headed by TFF President Yıldırım Demirören visited UEFA headquarters in Nyon, Switzerland, to submit the UEFA Euro 2024 bid dossier before the April 27 deadline. The Turkish national association in March 2017 submitted a declaration of interest to host the tournament.