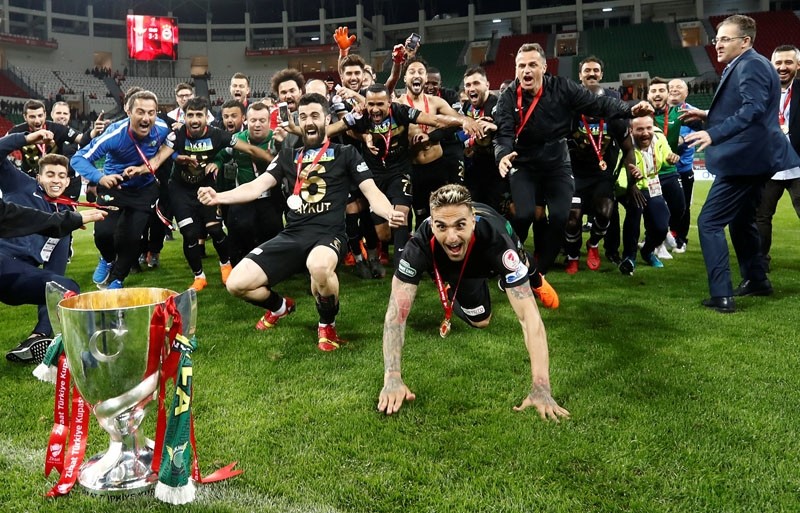 Akhisarspor players and coaching staff celebrate winning the Turkish Cup Final with the trophy, May 10.
by Hakan Baş May 12, 2018 12:00 am

After surrendering the Ziraat Turkish Cup to minnows Akhisarspor, Fenerbahçe will now turn its eyes to its last hope – the Super League title, but that too can only come with a little help from luck

This was Akhisarspor's first-ever Turkish Cup title, but the fact that it came against a team like Fenerbahçe made the achievement more incredible. In fact, the new Turkish Cup winner has been nothing less of voodoo for the Yellow Canaries this season. It handed Fenerbahçe two defeats in the Super League and now in the Turkish Cup final - meaning had Fener won the three games against Akhisar this season it would be top of the league and have won the Turkish Cup.

In the match, Akhisarspor found the first goal in the 32nd minute with Miguel Lopes, who scored with a fine volley. But Fenerbahçe equalized in the 56th minute with striker Jose Fernandao. Akhisar's Abdoul Sissoko and Helder Barbosa, however, scored two goals within 10 minutes to give the Aegean side a comfortable 3-1 lead with ten minutes to go.

Fenerbahçe's Brazilian midfielder Josef de Souza scored with a header in the 86th minute, but Akhisarspor managed to hold on to the lead for the remaining minutes to win the first major title in its history, and in effect earning the right to participate in the next year's UEFA Europa League qualifiers.

As a result, Trabzonspor, Göztepe, Sivasspor and Kayserispor which are ranked as fifth, sixth, seventh and eighth, respectively, in the Super League will not have the opportunity to participate in the UEFA Europa League next year.

For Fenerbahçe fans, it was another night of disappointment as they saw their team lose one more final match. In the Turkish Cup's 56-year history, the Yellow Canaries have played in 17 final matches, losing 11 of them. Fenerbahçe also lost the league title three times in the last week – in 2005-2006, 2009-2010 and 2011-2012.

On the other hand, humble Akhisarspor has become the 15th club to lift the domestic cup. They are also the third Aegean side to win the cup after Altay and Göztepe. The cup once again stayed in Anatolia since Atiker Konyaspor won it last year. Interestingly, however, Akhisarspor is battling hard to avoid the Super League relegation zone. They have 36 points – only three more than 15th-placed Osmanlıspor.

Fenerbahçe, on the other hand, still has a slim shot at the league title. The Istanbul giant has 66 points, three points behind leader Galatasaray with two weeks to go. It will travel to already-relegated Karabükspor on Monday while Galatasaray will host Evkur Yeni Malatyaspor Saturday. The match against Karabükspor may look easy but it might not be a walk in the park since the side does not have anything to lose.

With the last two weeks to go, tension is running high again in the Super League. Beşiktaş will travel to relegation-threatened Osmanlıspor Sunday. The Black Eagles are four points behind Galatasaray and would need a miracle to defend its titles this season.Osmanlıspor has 33 points and it is behind Atiker Konyaspor with 35, Akhisarspor and Aytemiz Alanyaspor with 36 each and Antalyaspor with 38 points.