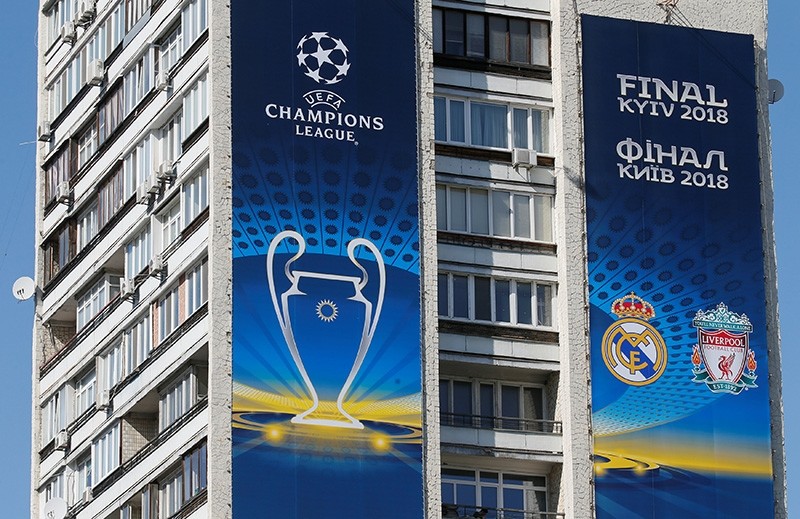 Fancy shelling out 3,500 euros ($4,200) for a night in a budget hotel? Liverpool and Real Madrid fans may not end up sleeping rough for the night when they come to Kiev for the Champions League final.

The Ukrainian capital is the focus of fan fury after its hotels began charging 100 times their standard rates for the big match on May 26 for the expected influx of around 50,000 supporters. And some supporters lucky enough to book their beds before they turned into luxury items were aghast to discover their reservations annulled.

The Liverpool FC supporters club even posted a "rough" guide on Facebook that included overnight stays in the Polish city of Wroclaw. The trek back out of Kiev was set for 3:00 am.

The European football governing body UEFA issued a diplomatic statement to AFP agreeing it might be wisest to just pop in and out of town on match day. "It is expected that the preferred option for the majority of travelling fans will be charter flights arriving and leaving on the same day," UEFA said.

The rates some of the city's more modest places are charging sometimes look like a misprint. A hotel called Harmony on Andriyivskiy Descent offers a room with a double bed and a miniature TV set balanced on a windowsill for 3,534 euros. Another two euros gets you a breakfast. A person at reception asked AFP to write a formal letter to management when asked why the price had been revised up for that one day from the usual 29 euros.

Fans who thought they were being clever by booking long in advance also had trouble getting answers after discovering they had no places to stay.

"Booked my hotel for Kiev months ago," a Liverpudlian named Stephen wrote on Twitter. "Now @bookingcom decided that they are gonna cancel it for me free of charge so I can re-book it for 15 grand!"

A spokesperson for Booking.com said all of the site's prices were set by the hotels and that it was ready to defend the interests of clients who had their reservations tossed out.

The Spanish sport daily Marca published accounts of similar horror stories befalling Real fans. One received a message from his hotel asking him to cancel his reservation "because we will not have electricity and water for the dates indicated". Another place said "a virus attack" was responsible for a cheap room being offered when in fact there were none.

Kiev city authorities have responded by assigning the problem to the state anti-monopoly committee. The committee said on Tuesday that it had started "to monitor prices on the hotel services market". It has not been heard from since.

All of which prompted kind Ukrainian souls to start a Facebook page offering free couches to desperate lovers of the beautiful game. To promote a welcoming image of Ukraine, Ukrainians have taken to social media to offer supporters spare beds, lifts from the airport and even home-cooked meals of borscht, a traditional beetroot soup. It had nearly five thousands members by Saturday and a big write-up in the Liverpool Echo newspaper.

Even President Petro Poroshenko has offered to host a few fans to make up for the lack of affordable accommodation in the capital over the weekend of the final.

Ukrainian lawmaker Yegor Sobolev and his family are among the locals that decided to invite soccer fans to stay in their home for free when they heard hotels had aggressively raised prices.

Opposition MP Sobolev, his wife and three children have agreed to hand over the keys to their apartment in central Kiev to a Liverpool supporter and his young daughter.

"I don't think this is a risky idea. This is a pleasant and powerful way to connect people from different countries and continents," he told Reuters in his apartment.

"That is what football means," he said, surrounded by his children including his soccer-mad son Misha, 11, who was wearing full Liverpool kit.

This is not the first time the family have hosted strangers. In 2014, they invited a family to stay for three months who had fled pro-Russian separatist fighting in eastern Ukraine.

Page creator Victor Kylymar told the paper that he was not really into football but felt an "obligation" to help people out. "This is a common event for all of Europe and to use this to make money is not the best idea," Kylymar said.

Kiev's outpouring of hospitality stems in part from a desire to show the country has recovered from the worst of a political and economic crisis sparked by a 2013/14 pro-European uprising and subsequent separatist conflict.

"This group should be called 'You'll Never Walk Alone'," member Zibby Puculek said in a post, referring to the Liverpool club anthem. "You are very, very nice people."