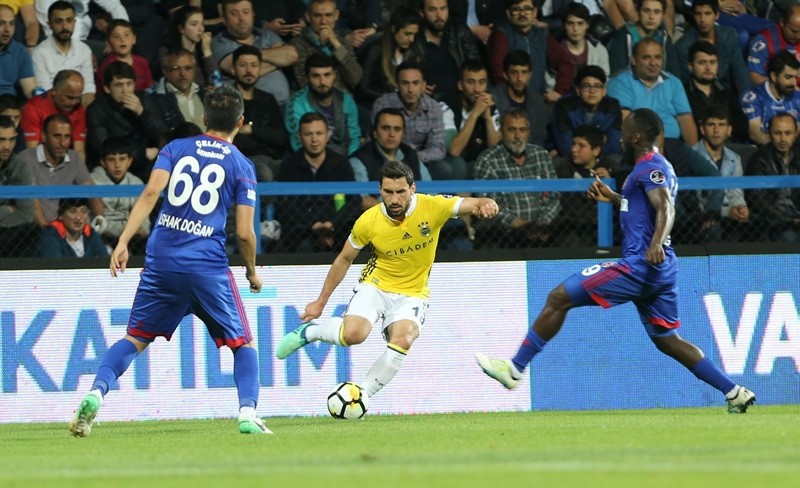 The race for the Turkish Super League championship title will resume for the final week while the last team to relegate was determined Monday.

With three more goals in the second half, Fenerbahçe managed to equalize the goal averages of leaders Galatasaray with one game left to play in the Super League. At 12 points, Karabük's relegation became apparent in the 28th week.

Fenerbahçe's scorers were Fernandao (2), Atif Chahechouhe, Roberto Soldado, Nabil Dirar and Vincent Janssen. An own goal was scored in the second minute.

The victory against Karabükspor carried Fenerbahçe to second place at 69 points, ahead of Istanbul club Medipol Başakşehir by goal averages. They will now have to wait for Galatasaray to lose if they are to become champions.

Galatasaray only need one point in their last match in an away game against Izmir club Göztepe this Saturday to become Turkish league champions for the 21st time.

At the bottom of the table, Osmanlıspor became the third team to relegate from the Turkish Super League as Aegean club Akhisarspor, recently decorated with their first major trophy in a 3-2 victory against Fenerbahçe in the Turkish Cup, beat Kayserispor 2-1 Monday. Since 15th place Konyaspor at 36 points is ahead on double averages, 16th Osmanlıspor, standing at 33 points after losing against Istanbul's Beşiktaş 2-3 on Sunday, has dropped out of the race.

In a sad coincidence, Osmanlıspor became the second Ankara club to relegate this season after Gençlerbirliği, currently at 30 points, was relegated from the league last week. Luckily, MKE Ankaragücü, the club with by far the largest fan base in the capital, will represent Ankara in the top tier of Turkish football after a six-season break.

Beşiktaş keep their hopes alive for second place and Champions League third qualifying round ticket, although it would be very unlikely since both Fenerbahçe and Başakşehir would need to lose or draw on the 34th week.

Results for the 33rd week in the league: