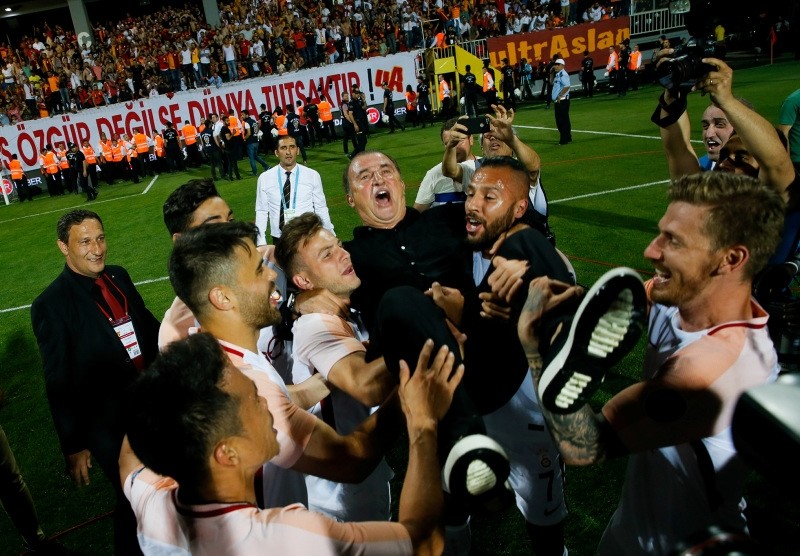 Istanbul giants Galatasaray became the champion in Turkish Super League for a record 21st time on Saturday after defeating Izmir's Göztepe 1-0 in its final game of the season thanks to French striker Bafetimbi Gomis' second-half penalty.

The victory sealed a triumphant return to the club for veteran coach Fatih Terim, dubbed the "Emperor," who took the reins for the fourth time last December, months after leaving his job as Turkey coach amid controversy over a street brawl.

Galatasaray needed a win or a draw in Saturday's match to win the title with its nearest challengers Fenerbahçe and Başakşehir playing home games against Konyaspor and Kasımpaşa respectively.

Gomis, who has spearheaded Galatasaray's attack, took his season's goal tally to 29 with his 66th minute spot-kick, making him the top goal scorer of the season. He also broke the record of former Fenerbahçe's Brazilian player Alex de Souza as the highest-scoring foreign player in the Turkish league.

"I am very happy. I broke the goals record," Gomis said, but he added: "The championship we have achieved is much more important than my personal statistics."

Fans of Galatasaray drove through the streets of Istanbul and Ankara, honking car horns and waving flags in the clubs red-and-yellow colors, while others set off fireworks and flares.

Galatasaray won the league with 75 points with Fenerbahçe and Başakşehir, both three points adrift, each won their final matches 3-2.

Istanbul's other major club, Beşiktaş, won the title in each of the last two seasons.

Galatasaray, who also won the UEFA Cup in 2000, last won the domestic title in 2015. They are now two titles ahead of Fenerbahçe, who won it most recently in 2014.

Following the victory, Terim tweeted: "Knock knock! Guess who is back?

Galatasaray signed a one-and-a-half year contract with Terim for three million euros, and his deal also entitled him to 500,000 euros in bonuses for each season if he takes the league title.

Terim, 64, replaced Croatia's Igor Tudor who was sacked after just 10 months in charge.

"We are embracing this championship. I am so happy," Terim told reporters.