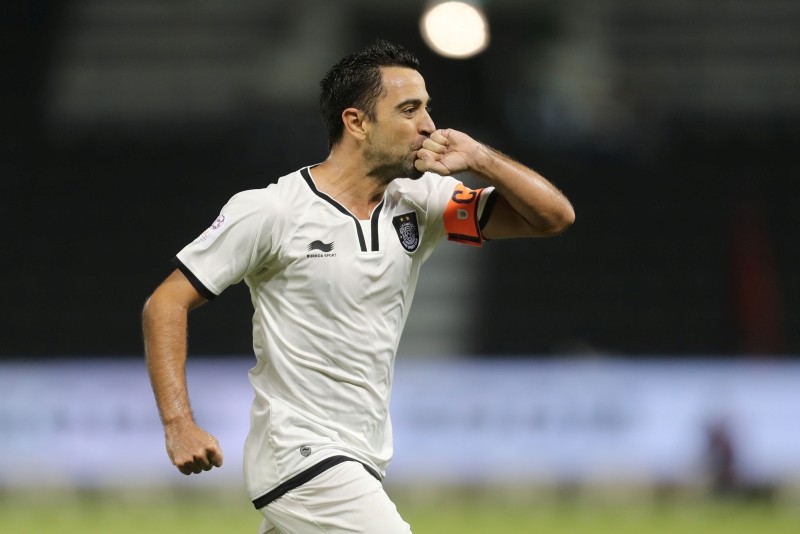 Qatari Al-Sadd club's Xavi Hernandez celebrates scoring a goal against Al-Rayyan's team during their Qatar Stars League football match at the Jassim Bin Hamad stadium in Doha. (AFP Photo)
by May 24, 2018 12:00 am

Xavi Hernandez could play on until the age of 40 after it was announced on Thursday he has signed a two-year extension to his contract with Qatari club Al Sadd.

The legendary former Barcelona and Spain midfielder will stay with the Doha-based club until the end of the 2020 season, according to a statement released by Al Sadd on social media.

"I am happy to keep on being a part of the Al Sadd family for two more years," said Xavi.

"I am delighted to be at the club and with its fans.

"Everyone here is one big family and I am satisfied and thrilled to continue."

Xavi joined Al Sadd in 2015, originally on a two-year contract, after making more than 700 appearances for the Catalan giants.

He extended the original contract by 12 months but the 38-year-old was widely expected to retire at the end of the Qatari domestic season, which finished earlier this month, to concentrate on earning coaching badges.

Xavi himself had even signalled that the season just ended would be his last and spoke about not being able to cope with the physical demands of professional football as he got older.

But with Al Sadd still in the AFC Champions League the player is still feeling good physically, announcing earlier this month that he would continue playing until the end of this year at least.

He has now changed his mind again.

Since being in the emirate he has been named as a global ambassador for the Qatar World Cup, helped in the official launch of Lusail stadium, the venue for the 2022 World Cup final, and has been strongly tipped to be the team's coach by the time the tournament comes around.

Xavi was a World Cup winner with Spain in 2010 and was handed 133 caps by the national side.

He was also in a Barcelona side which took eight La Liga titles, four Champions League titles, and he became synonymous with the club's tiki-taka style of play.

Since playing in Qatar he has won three more trophies but none in the season just completed.

The announcement comes on the same day as his former Barcelona teammate Andres Iniesta officially announced he was moving to play in Japan's J-League.