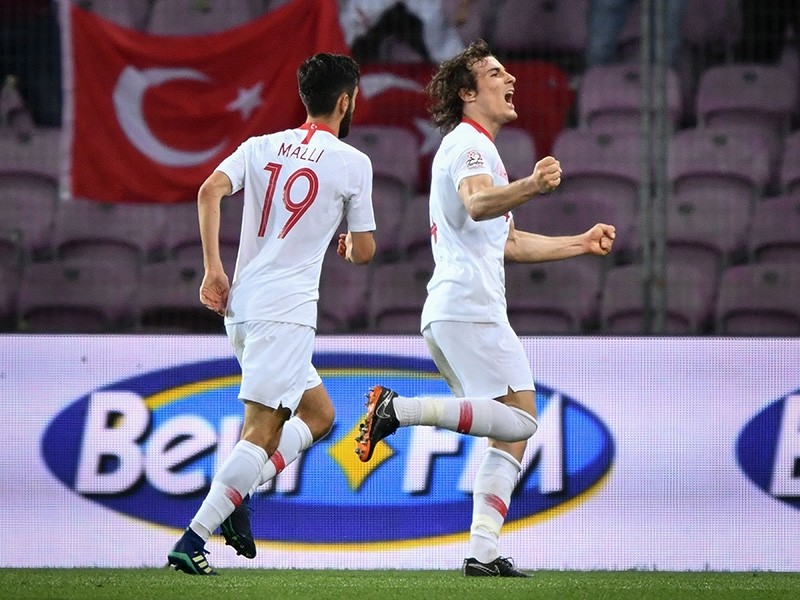 Turkey's defender u00c7au011flar Su00f6yu00fcncu00fc (R) celebrates after scoring his team's second goal during the friendly football match between Tunisia and Turkey at the Stade de Geneve stadium in Geneva on June 1, 2018. (AFP Photo)
by Daily Sabah with AP Jun 02, 2018 12:00 am

Turkey netted a last-gasp equalizer against Tunisia on Friday despite playing down a man, setting the score at 2-2 draw in a World Cup warmup friendly match.

Anice Badri fired in a rising half-volley from 20 meters (yards) to equalize two minutes later before Tosun was shown a red card after leaving the pitch to argue with fans.

Tunisia captain Ferjani Sassi put his side ahead in the 79th minute when his low shot went in off goalkeeper Serkan Kirintili's right-hand post.

Turkey then leveled in the 90th minute when Çağlar Söyüncü scored from close range following a quickly-taken free kick, a goal that sparked a pitch invasion by its fans.

Tunisia will open its World Cup Group G program against England on June 18 before going on to play Belgium and Panama.

In other matches Friday, Australia beat the Czech Republic 4-0 and France defeated Italy 3-1.

Turkey and Tunisia have met each other 11 times, with the former winning on eight occasions. The other three matches ended in draws.

Turkey advanced to the finals of the FIFA World Cup on two occasions in 1954 and 2002 and finished ninth and third respectively. Turkey's dreams of participating in the 2018 World Cup were crushed after it had suffered a 3-0 defeat against Iceland last October.