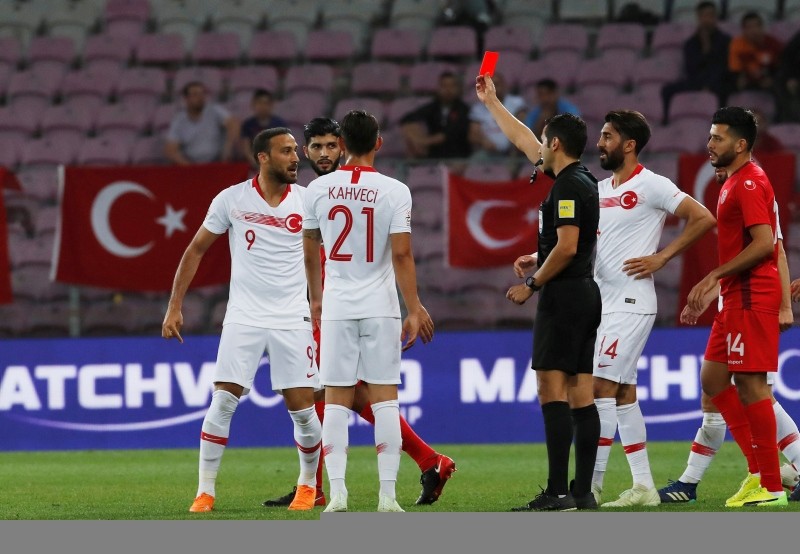 English Premier league club Everton's ace Cenk Tosun was sent off the field on Friday playing for Turkey after a dispute with a fan, receiving the first straight red card of his career.

Just minutes after scoring a penalty for Turkey in a friendly against Tunisia, the 26-year-old got caught up in a verbal altercation with a Turkish fan at Switzerland's Stade de Geneve.

About 2 minutes after Anice Badri equalized the score, Tosun charged towards the sidelines, began pointing into the stands and made a throat-slitting gesture at a fan.

His teammates pulled him back onto the pitch, trying to restrain him.

Moments later, the Swiss referee showed Tosun a red card, dismissing him from the game.

The dispute, which left Turkey with 10 men for the rest of game, momentarily came to a halt but soon picked up pace, and ended in a 2-2 draw much to Tunisia's dismay.

Speaking to Turkish outlet A Spor a day after the incident, Tosun apologized for his behavior and said he would not repeat such a move and lose his temper that way.

"I saw some people quarreling with my father in the stands. You see, for me family comes first," he said.

"In that moment I just blacked out and lost myself. It was unbecoming of me, I'm sorry," he added.

"I guarantee it won't happen again," he said, pointing out that character should be more important than football.

The Germany-born Turkish international joined Everton from Turkish champions Beşiktaş in the January transfer window for a reported fee of 22 million euros ($27 million).

The Turkish striker also "became the first Turkish player to score a PL brace for nearly 10 years," according to the EPL.