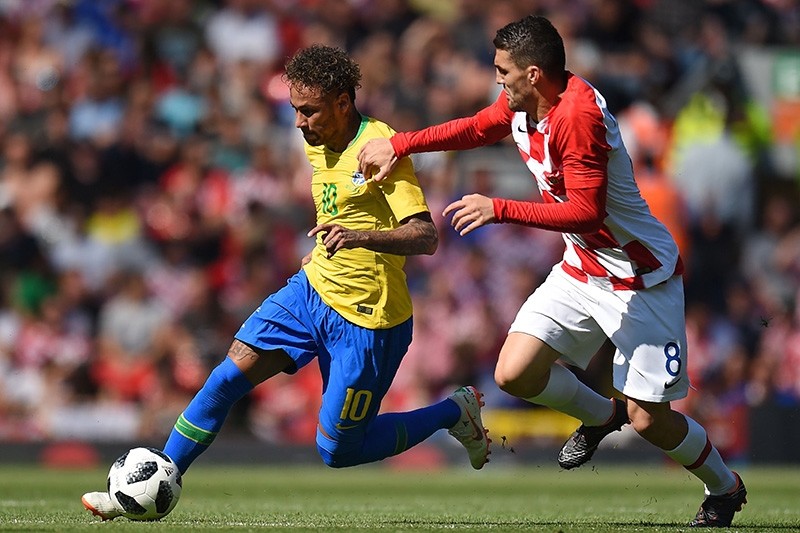 Brazil's striker Neymar (L) vies with Croatia's midfielder Mateo Kovacic during the International friendly football match between Brazil and Croatia at Anfield in Liverpool on June 3, 2018. (AFP Photo)
by Compiled from Wire Services Jun 03, 2018 12:00 am

Brazil striker Neymar made a spectacular return on Sunday after a three-month absence with a foot injury and celebrated a superb individual goal with his surgeon.

Playing for the first time since February, Neymar scored the opener in Brazil's 2-0 friendly win against Croatia in Liverpool. The striker then ran to hug Brazilian soccer confederation doctor Rodrigo Lasmar on the sidelines at Anfield.

Neymar had replaced midfielder Fernandinho at halftime with the score at 0-0 and needed less than 25 minutes to make his mark and raise hopes of Brazilian fans for the World Cup, which starts June 14.

Neymar, who withstood a few challenges in the game, received the ball from Philippe Coutinho in the 68th and dribbled past Croatia defenders Sime Vrsaljko and Duje Caleta-Car. He smashed the ball into the net from around five meters (yards) with his right foot.

Neymar injured the same foot playing for Paris Saint-Germain and underwent surgery in Brazil in early March. He did not warm up with the Brazilian team on Sunday.

Liverpool's Roberto Firmino scored Brazil's second goal in the 90th. After Casemiro put the ball in the penalty box, Firmino controlled with his chest and sent the ball over Croatia goalkeeper Danijel Subasic to step up his challenge for a starting position in the team.

Brazil captain and No. 9 Gabriel Jesus was not as impressive in the first half of the match, and was replaced by Firmino after an hour.

The same Liverpool supporters who cheered Firmino went out of their way to jeer Coutinho, who left the Reds for Barcelona earlier this year.

Until Neymar stepped onto the pitch it was Croatia who had the best opportunities in a match that seemed headed for a dull draw.

Defender Dejan Lovren had the best chance to open in a header that grazed Brazil goalkeeper Alisson's right post after a corner.

"[Neymar] will be on the bench because he is in the process of recovery and will play in the second half because this is a match to prepare the whole team," Brazil coach Tite said at a news conference on Saturday.

Asked whether that would be his starting lineup if the World Cup began now, Tite said "Yes" three times.

"At this moment they are the best and we have to work with the current moment," Tite said.

That would mean defender Thiago Silva, Brazil's captain at the 2014 World Cup, getting his place back in the starting lineup alongside Miranda, leaving his Paris Saint-Germain teammate Marquinhos out.

"It was very difficult to choose," Tite said. "When Marquinhos got injured a few months ago, Thiago stepped in and did great. Sometimes it pains my heart and I have to decide. It would be fair to have any of those three in the team."

Still, Tite said he could change his mind before the World Cup begins. Brazil's opener is on June 17 against Switzerland. Costa Rica and Serbia are also in Group E.

Brazil's coach denied that the midfield formation with Casemiro, Fernandinho and Paulinho would be too cautious.

Midfielder Renato Augusto, who plays more as a pacemaker, was injured earlier in the week during training and replaced by Manchester City's Fernandinho.

Five-time World Cup champion Brazil will not have a single captain for the tournament and 21-year-old striker Gabriel Jesus will lead the team on Sunday.

"We will keep sharing (the captaincy) in the World Cup. But with athletes that are more experienced, they will be used more," Tite said.

Croatia was deliberately picked by Brazil as a tough opponent, and coaching assistant Cleber Xavier said it was a test similar to the one Brazil will face against Serbia.

"Croatia has many players in Italy, Spain. Their midfielders are great and they play with two lines of four players. Luka Modric here is different from the one of Real Madrid. It will be a great test," Xavier said.

Modric said Brazil was better than the team which opened the 2014 World Cup against Croatia in Sao Paulo. Brazil won that game 3-1 with two goals from Neymar.