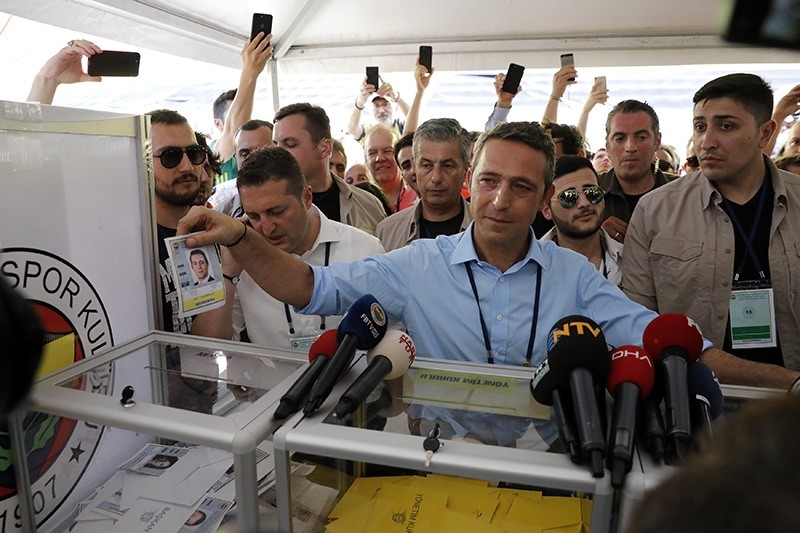 The 51-year-old Koç defeated Yıldırım by receiving 16,092 out of the 20,736 valid votes cast during the club's general congress on Sunday at Şükrü Saraoğlu Stadium.

Koç, a member of Turkey's wealthiest family which runs the conglomerate Koç Holding, will now serve as the 37th president of the club.

There has been little challenge to 65-year-old Yıldırım's reign over the last two decades - until Koç, a successful businessman from one of Turkey's wealthiest families, garnered strong support within the club.

Born in 1967 in Istanbul, Koç has held the vice presidency of the executive board of Koç Holding since February 2016.

Addressing the crowd after his victory, Koç said he had achieved this success through the support of millions of people.

"I always believe whoever wins, he will win by a landslide," Koç said, adding that he would work to make the dreams of all Fenerbahçe fans come true.

"I congratulate you," he told supporters after his election victory was announced. "I am just the shop window of this success."

In a message of reconciliation after the tense congress, he said: "We have not sworn allegiance to anyone, or taken advantage of anyone. We have made sure we are worthy of this community."

Under Yıldırım, Fenerbahçe has experienced many ups and downs. The president's battle with the jurisdiction, politicians and fans were always a part of that journey. But Yıldırım's key moment was the fixing scandal in 2011 - which he claims was a malicious plot against Fenerbahçe - that led to the club's suspension from the European tournaments.

European football's governing body UEFA barred Fenerbahçe from European tournaments for two seasons as a result of its investigation in 2013.

Turkey's match-fixing scandal broke out after the 2010-11 season of the Spor Toto Süper Lig, which saw Fenerbahçe win the title.

Several important football figures -- chairmen, players and board members -- were taken into custody over match-fixing and bribery after a legal action was launched in July 2011.

That month, Yıldırım was jailed for forming an illegal organization and his involvement in match-fixing in Turkish football's top division. He was sentenced to six years and three months, of which he served a year. In June 2014, Yıldırım's jail term was suspended and a retrial was ordered as the investigation was linked to judges and prosecutors linked to the Gülenist Terror Group (FETÖ). Yıldırım was acquitted of all charges by an Istanbul court on Oct. 9, 2015.

The renovation of the stadium, which boasts a 50,530-seat capacity, was completed in April 2006.

The stadium hosted the 2009 UEFA Cup Final, the last under that name. It was rebranded as UEFA Europa League.

Yıldırım presidency also saw Fenerbahçe gaining Ülker Sports and Event Hall, one of the best facilities of its kind in Turkey, where the club's basketball branch play their home games.

In more than 100 years of existence, Fenerbahçe has won 19 Turkish Super Lig titles, six of which came during the Yıldırım era.

Fenerbahçe's men's basketball team was crowned Turkish Airlines EuroLeague champions in May 2017 to become the first ever Turkish club to lift that trophy.

The third son of former Koç Group Chairman Rahmi Koç, Ali Koç has promised to use his business contacts to reinvigorate the club. His administration list includes prominent businessman and executives, including Erol Bilecik, who is the president of Turkey's largest business organization Turkish Industrialists and Businessmen Association (TÜSİAD) since Jan. 2017. Ali Koç's eldest brother Mustafa Koç, the former Koç Group chairman, died in 2016. His other brother Ömer Koç currently leads the group. Forbes magazine this year estimated that the family patriarch Rahmi Koç has a fortune of $1.76 billion.

President Recep Tayyip Erdoğan has congratulated Ali Koç on his win, the presidency said in a statement.