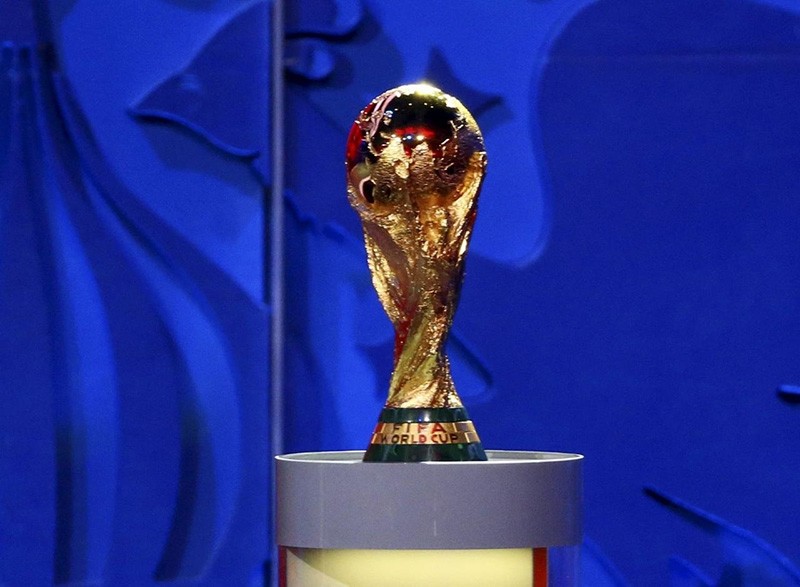 The World Cup trophy is seen during the preliminary draw for the 2018 FIFA World Cup at Konstantin Palace in St. Petersburg, Russia, in this file picture taken July 25, 2015. (Reuters Photo)
by Compiled from Wire Services Jun 12, 2018 12:00 am

FIFA members will decide on Wednesday whether the 2026 World Cup should be played in North America or in Morocco, taking football's global showpiece to Africa for just the second time.

The choice is clear -- between a slick bid based on gleaming stadiums in the United States, Mexico and Canada or an ambitious attempt from Morocco based on as-yet largely unbuilt facilities.

On the eve of the 2018 World Cup in Russia, 207 FIFA member nations will cast their vote in a congress of world football's governing body.

Morocco's bid for 2026 was only cleared to advance to the runoff vote earlier this month, despite a FIFA evaluation report that classified the north African nation's stadiums, accommodation and transport as "high risk".

Morocco received only 2.7 out of five, with red flags raised over several critical components of the bid.

A FIFA summary of the bid taskforce's findings warned "the amount of new infrastructure required for the Morocco 2026 bid to become reality cannot be overstated".

The report left the U.S.-Canada-Mexico bid as the clear front-runner after giving it a rating of four out of five.

But the North American bid has been dogged by concerns that the vote could become a referendum on the popularity of U.S. President Donald Trump.

Bid leader Carlos Cordeiro on Monday repeated a message he has hammered out again and again in recent months -- vote on us, not Trump.

"We believe strongly that this decision will be made on its merits," Cordeiro said in a conference call with reporters. "This is not geopolitics, we're talking about football and what is fundamentally, at the end of the day, the best interest of football and our footballing community.... We've had no backlash."

The bid to bring the World Cup back to North America for the first time since 1994 has backing from former Manchester United and England midfielder David Beckham, who ended his career at LA Galaxy and is behind a nascent Major League Soccer franchise in Miami.

"A football competition as big as the World Cup deserves to be in great places and if the U.S., Canada and Mexico get that it will be very special," Beckham said.

U.S. President Trump has voiced support for the home bid but also issued a threat.

"The U.S. has put together a STRONG bid w/ Canada & Mexico for the 2026 World Cup. It would be a shame if countries that we always support were to lobby against the U.S. bid. Why should we be supporting these countries when they don't support us (including at the United Nations)?" he tweeted in late April.

It remains to be seen whether some FIFA members will bow to this after consultations with their governments, and which members will vote in favor of Morocco as a sign of protest at the congress in Moscow.

FIFA president Gianni Infantino has expressed hope that the election won't be influenced too much by politics, and that the congress would "take the decision which is right for football."

According to a high-ranking FIFA member, speaking on the condition of anonymity, Morocco could receive up to 45 of the 53 African votes, up to 25 of the Asian votes, and several from Europe.

The two confederations from the Americas, CONMEBOL and CONCACAF, will back United 2026 while it is not clear how the Oceania members will vote among the 206 set to cast their ballot - with the four bidders not eligible and Kosovo reportedly not present.

In Europe, France has already stated it will vote for Morocco, while the German federation for instance wanted to decide after the the presentations.

United 2026 also bid pledges revenues of 14.3 billion dollars, compared to half the amount from a Morocco-hosted tournament.

That's a big incentive for Infantino and FIFA which is still struggling financially in the wake of various corruption affairs and relies on the World Cup as its only major source of income.

German federation chief Reinhard Grindel said the United 2026 bid highlighted these "greater economic perspectives for FIFA" but also stressed "the big advantage of the United bid in the area of sustainability is that they have all stadiums and infrastructure."

Mexico would be the first country to host a World Cup three times, following 1970 and 1986. The U.S. staged the 1994 tournament, while Canada and Morocco - which is bidding for the fifth time - have never staged the showcase event.

"Both hosts would be wonderful, one based more on a palpable reality with an effort to maximize income. And another based more on the heart, on an idea to improve a country," Spanish FA president Luis Rubiales said.