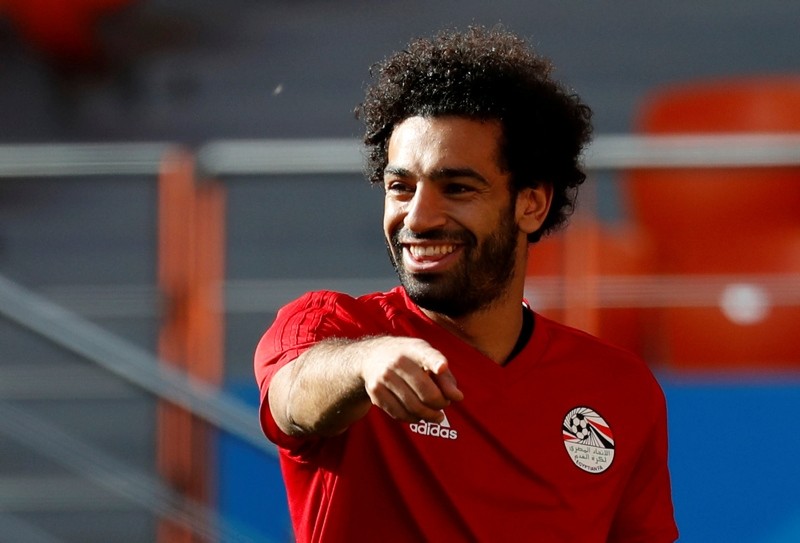 Egypt's Mohamed Salah gestures during training at the Ekaterinburg Arena in Yekaterinburg, Russia, June 14, 2018. (Reuters Photo)
by Compiled from Wire Services Jun 14, 2018 12:00 am

Egypt coach Hector Cuper said that star striker Mohamed Salah has recovered from his shoulder injury and will almost certainly play against Uruguay in the two sides' World Cup opener on Friday.

"We still have to see how training goes today, but I can almost assure you 100 percent that he'll play, we are all very optimistic that he will be on the pitch," Cuper announced on Thursday.

Salah, who sustained the injury in Liverpool's Champions League final loss to Real Madrid on May 26, is one of the biggest names at the World Cup and crucial to the north African side's hopes of making it out of a weak-looking Group A also featuring the hosts and Saudi Arabia.

Egypt play Uruguay — tipped by some to be dark horses — in Yekaterinburg in just the second game of the tournament, following Russia against Saudi Arabia in the opening match later Thursday.

Salah was one of the outstanding players in the world this season as he helped propel Liverpool to the Champions League final.

Salah, who turns 26 on the day of the game, gave 100 million frantic Egyptians a massive boost on Wednesday when he joined a squad training session at their Grozny base.

Salah had been questionable since suffering a left shoulder injury during a collision with Real Madrid's Sergio Ramos during the Champions League final last month in Kiev, Ukraine.

Salah almost single-handedly led Egypt to its spot in the 32-team World Cup field. He scored five goals in six games in the first round of the qualifiers, including a late penalty that earned the seven-time African champions their first World Cup berth since 1990.

Should he return as hoped, it would be the ideal present — Salah will celebrate his 26th birthday on Friday.