Spain ready to put coaching chaos behind at World Cup 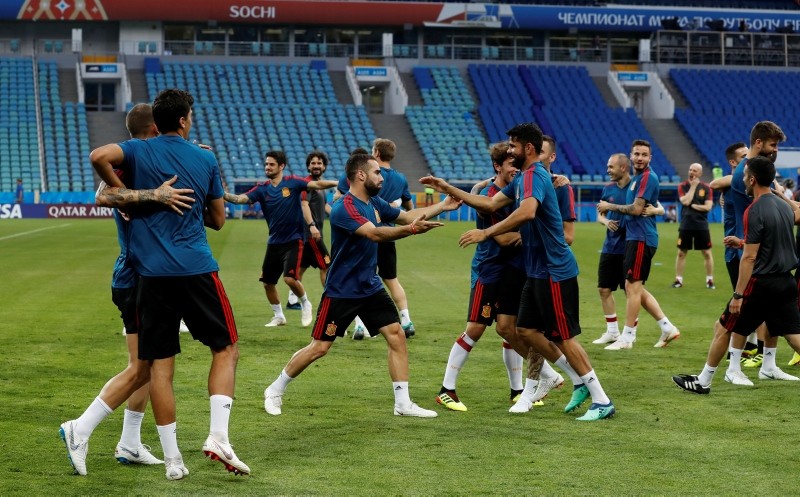 Spain's players take part during Spain's official training on the eve of the group B match between Portugal and Spain at the 2018 soccer World Cup in the Fisht Stadium in Sochi, Russia, Thursday, June 14, 2018. (AP Photo)
by Associated Press Jun 14, 2018 12:00 am

Spain is looking for a win against European champion Portugal in its World Cup opener to start moving forward after one of the most chaotic days in the national team's history.

Spain will have new coach Fernando Hierro on the bench Friday after Julen Lopetegui, who led the team on a 20-match unbeaten campaign since taking over the squad in 2016, was fired Wednesday for accepting the Real Madrid coaching job without informing the soccer federation in advance.

"We need to turn the page as soon as possible," Spain captain Sergio Ramos said Thursday. "Spain has to be above anybody. The World Cup starts tomorrow (for us) and we have a great game to play against the European champion. Hopefully we will start on the right foot."

Spain arrived as one of the title favorites thanks to its good performances under Lopetegui, but La Roja was rocked when newly elected federation president Luis Rubiales fired him for not properly handling the negotiations with Madrid. Hierro, a former national team player and Real Madrid captain who had been acting as Spain's sports director, was hastily picked for the job despite not having any significant coaching experience.

"Very few things will change. There wasn't a lot of time," said Hierro, who had previously coached second-division club Real Oviedo and was an assistant to Carlo Ancelotti after Zinedine Zidane left the post in 2014. "We are well prepared. We have been practicing intensely these past weeks and we have confidence in these players and the ideal that has been in place for the last two years."

Lopetegui, who was officially introduced by Real Madrid back in Spain not long after Spain's news conference in Sochi, had revamped Spain's national team after taking over from Vicente del Bosque following the 2016 European Championship.

Ramos, one of the six Madrid players with the national team, said the squad didn't want to talk about the coaching change anymore and would remain focused on playing soccer.

"The desire of this group to do well hasn't changed," he said.

Ramos, who will captain Spain in a World Cup for the first time, dismissed reports that players tried to persuade the federation president to change his decision on Lopetegui.

"This is a decision that doesn't belong to us. It's taken by people who have more power than the players," he said. "We can only do something on the field."

Ramos said Lopetegui "would remain a part of whatever happens to Spain in this World Cup."

At the end of the news conference at Fisht Stadium, the outspoken defender said he wanted to leave with a smile on his face.

"This looks like a funeral," he said. "Tomorrow the World Cup starts for us."