Croatia bags victory after penalty and Nigeria's own goal 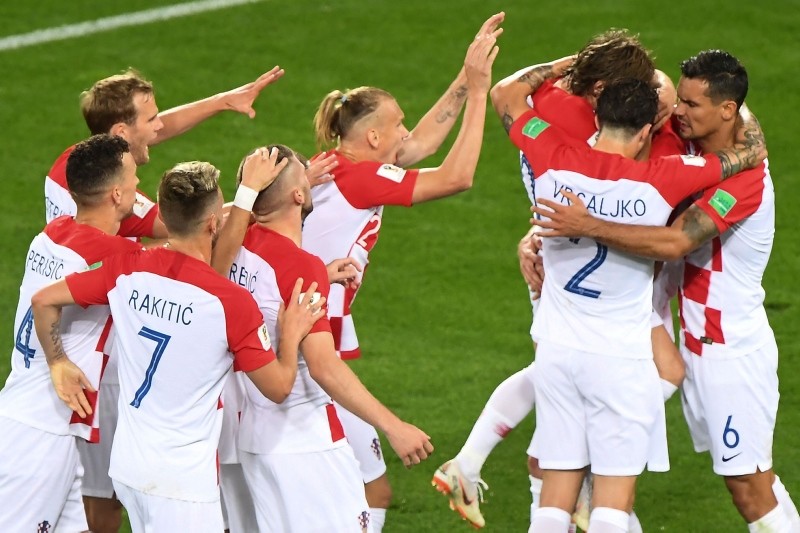 Croatia's players celebrate an own goal by Nigeria's midfielder Oghenekaro Etebo during the Russia 2018 World Cup Group D football match between Croatia and Nigeria at the Kaliningrad Stadium in Kaliningrad on June 16, 2018. (AFP Photo)
by Jun 17, 2018 12:00 am

Croatia beat Nigeria 2-0 on Saturday with an own goal from Oghenekaro Etebo and a penalty from Luka Modric to go top of World Cup Group D, one of the toughest and most unpredictable in the tournament.

Modric's coolly taken 71st-minute spot-kick gave the scoreline a clear-cut feel, but the fact that Croatia failed to score on their own from open play was a testament to some wayward shooting.

While dominating for long periods, they struggled to penetrate the Nigerian defense and failed repeatedly to find the target with speculative shots from well outside the penalty area.

The result puts Croatia in pole position for now after Argentina - their next opponents in the group - were unexpectedly held to a 1-1 draw by Iceland.

Looking ahead to that clash in Nizhny Novgorod next Thursday, Modric told reporters: "It is going to be a difficult match, maybe against the favorites in our group. They have quality but this win will boost our confidence.

"It will be tough, granted, but they will have to play for a win because of the scoreline today that they never expected."

Nigeria coach Gernot Rohr highlighted his team's weakness in defending at set-pieces and said victory against Iceland next Friday was now a necessity.

"All is possible for the qualification... We keep smiling, we are disappointed, and we will try to be better in the next game," he said.

"Of course it is important now to make at least four points if you want to qualify. We are one point behind now. It is all in our hands. We have the youngest team in the World Cup - let them learn from this, and we will do better."

The first goal came just after the half-hour mark when a Croatian corner from the right was headed across the box and on to striker Mario Mandzukic, whose diving header found its way into the net off Etebo's foot.

Just three days into the World Cup, the scrappy goal added to what is becoming a pattern, following a Moroccan own goal that handed victory to Iran on Friday and a deflected Paul Pogba effort that earned France a 2-1 win over Australia earlier on Saturday.

Until then, Croatia and Nigeria had appeared evenly balanced, with the African side's goalkeeper Ikechukwu Ezenwa untroubled by powerful but long-range shots from Ivan Perisic and Andrej Kramaric - the first going over the bar and the second finishing wide.

As the game heated up, Kramaric headed onto the roof of the Nigerian net, while at the other end Alex Iwobi had a shot charged down and Victor Moses fired over the bar.

Nigeria started the second half with intent as Leon Balogun headed over, but the first half pattern reasserted itself as Croatia imposed their authority while failing to land shots on target.

Their best chance fell to Ante Rebic, but his well struck volley zoomed wide of the goal as he ran onto a pass from Perisic.

Croatia again had their opponents to thank for their second goal, after William Troost-Ekong grabbed Mandzukic in the penalty area, wrapping both arms around him from behind in a tight embrace that would have done credit to an amorous Cossack.

Modric strode up to stroke the ball low into the left-hand corner, giving Ezenwa no chance.

Asked if he had been nervous after Lionel Messi's penalty miss for Argentina against Iceland, the Croatian captain was dismissive.

"I wasn't nervous. I was fully focussed on scoring from that penalty spot. Thank God I managed to score - nothing more to be said, really."