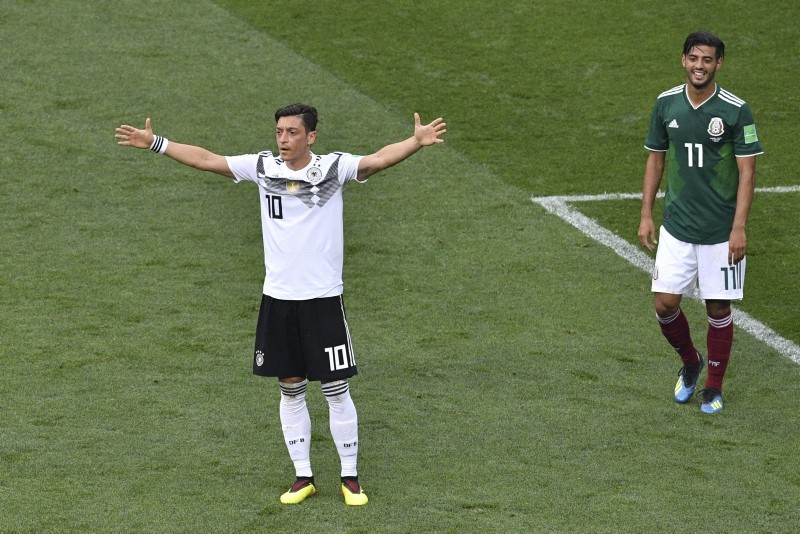 Germany's midfielder Mesut Ozil (L) reacts during the Russia 2018 World Cup Group F football match between Germany and Mexico at the Luzhniki Stadium in Moscow on June 17, 2018. (AFP PHOTO)
by Daily Sabah with Agencies Jun 17, 2018 12:00 am

Germany became the third defending champion in the last 16 years to lose its opening match at the World Cup, falling to Mexico 1-0 Sunday after constant attacks on its star players over their meeting President Recep Tayyip Erdoğan.

Hirving Lozano scored the lone goal in the 35th minute, picking up Javier Hernandez's pass inside the penalty area and beating Mesut Özil before shooting past Manuel Neuer from 10 yards.

Mexico pulled back into a more defensive formation midway through the second half as players tired and Germany attacked.

France in 2002 and Spain in 2014 were the other defending champions to lose their opening matches.

Germany coach Joachim Loew admitted the reigning World Cup champions were made to pay for a poor first half as they slumped to a 1-0 defeat by Mexico on Sunday.

Hirving Lozano scored the only goal after 35 minutes in Moscow as Germany lost their opening game at a World Cup for the first time in 36 years.

"In the first half we played very badly," Loew said. "We weren't able to impose our usual way of playing, our attacking and passing was not effective."

"In the second half we pressed more but Mexico dropped back," he added.

"We had a couple of shots on goal but somehow it seemed jinxed, the ball wouldn't go in and sometimes we didn't keep our cool with our finishing.

"Tomorrow we have to look forward and put this behind us."

Germany's Mesut Özil and Ilkay Gündoğan, both of Turkish origin, experienced pressure and insult for weeks from German fans after posing with Erdoğan during the president's visit to London last month.

German police confirmed that Gündoğan filed a complaint against unknown persons after his car was vandalized during a friendly game on June 7 against Saudi Arabia.

Loew called on German fans to stop booing Özil and Gündoğan after the Premier League stars found themselves at the center of a political row.

"My job is to get both players, who have certainly suffered from this situation, in good shape," said the head coach on Wednesday at Germany's first press conference in Russia.

"It may be that these players will still be accompanied by whistles. So be it. I wish it were otherwise. My job is to get them in the flow to help the team."