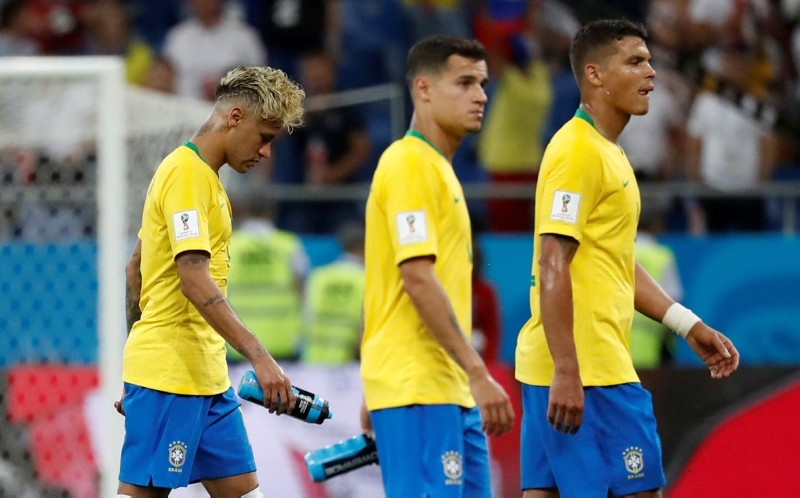 Switzerland came up with a spirited performance in holding five-time champions Brazil to a 1-1 draw in their World Cup opener on Sunday.

Brazil came out guns ablazing and went ahead in the 20th minute on a tantalizing long strike by Philippe Coutinho.

But Switzerland stood up to the Selecao with the equalizer in the 50th minute on a Steven Zuber header. And then the Nati held off the powerful Brazilian attack to grab the point.

The draw gives both teams one point in Group E - behind Serbia who have three points after a 1-0 win over Costa Rica.

The only time Switzerland and Brazil previously met in the World Cup came in 1950, when Swiss Jacky Fatton scored in the 88th minute for a 2-2 draw.

Captain Marcelo was the only starter in Brazil's line-up that also featured in the first eleven in his country's embarrassing 7-1 loss to Germany in the 2014 World Cup semi-finals.

Neymar, who missed the 2014 moment-to-be forgotten with a broken bone in his back, was able to play even though coach Tite said Saturday he was not "100 percent" fit.

The first 10 minutes at Rostov Arena featured both teams feeling each other out with Brazil venturing forward a bit more. The South American powers just missed grabbing the lead in the 11th but Swiss keeper Yann Sommer did a good job deflecting away Paulinho's left foot attempt.

Sommer had no chance though in the 20th minute as the Brazilians took the lead on a brilliant effort by Coutinho. The midfielder touched down a clearance attempt before blasting a superb long range curler that banged off the far right post and in for his 11th goal for the Selecao.

Switzerland were unable to really threaten the opposing goal and were more conspicuous with their tough challenges on the Brazilian playmakers with Neymar spending his fair share of time on the ground grabbing various parts of his body.

The action died down over the rest of the first half - though Switzerland controlled a bit more of the possession - until Diego Silva nearly doubled the advantage in first half stoppage time, sending his header off a corner just over the bar.

Switzerland did not hang their heads and knotted the game just five minutes into the second half on a set piece. Zuber gave Miranda a slight push in the back to create enough space to head home Xherdan Shaqiri's corner kick from the right side in the 50th minute.

Brazil tried to pick up the pressure but the Swiss defence continued to work hard to destroy their attacks, with yellow cards mounting and the instances with Neymar getting battered - with Valon Behrami getting booked in the 68th minute for a challenge on the Paris St Germain star.

Coutinho looked good to double his tally and put Brazil back ahead in the 70th minute but his right foot shot went just wide right.

Switzerland concentrated their defensive effort and kept Brazil's dangerous attack under wraps, though the Nati fans held their breaths in the 88th minutes on Neymar's header, which Sommer was able to collect comfortably despite the star having room.

Sommer was up to the task two minutes later as he batted away Roberto Firmino's point blank header.

The final Brazilian wave continued with Miranda sending a blast a minute later just wide left a minute later and then Swiss defender Fabian Schaer saved Renato Augusto's shot at the line six minutes into stoppage time to save the point.