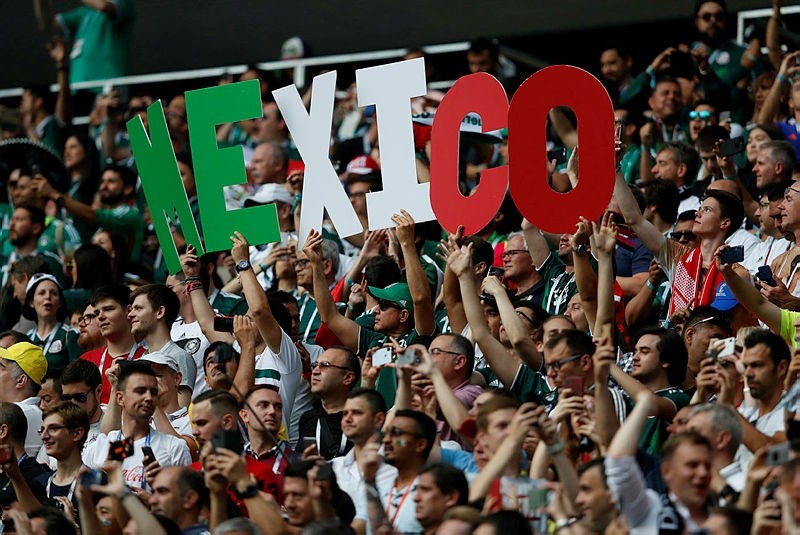 Fans hold up letters spelling out Mexico ahead of the start of the group F match between Germany and Mexico at the 2018 soccer World Cup in the Luzhniki Stadium in Moscow, Russia, Sunday, June 17, 2018. (AP Photo)
by Compiled from Wire Services Jun 18, 2018 12:00 am

FIFA has opened a disciplinary case against Mexico after fans used a homophobic chant in their World Cup win over Germany, the ruling body said on Monday.

An anti-discrimination observer contributed to a report from match delegates which was sent to FIFA, who could now levy a fine.

Mexico's own football federation has urged Mexican fans in Russia to stop the chant.

Shouts of "Puto" were heard during Mexico's 1-0 victory over Joachim Loew's world champions on Sunday in Moscow. The term is a homophobic insult in Mexican Spanish and is aimed at opposition players.

"Further updates will be communicated in due course," said FIFA. "As proceedings are ongoing please understand we cannot comment further at this stage."

The Mexican football federation (FMF), which has repeatedly appealed to fans to stop the chant, was sanctioned 12 times for homophobic chanting during the World Cup qualifying campaign, receiving warnings for the first two offences and fines for 10 more.

"Prevent Russia from taking away your Fan ID or arresting you," the Mexican federation said on Twitter.

"Think about the fact that you are a representative of the best fans in the world."

Supporters in Russia must have a Fan ID to access matches and it is used instead of a visa.

The chant was widely heard at Mexico games in the 2014 World Cup in Brazil, when FIFA took no action, but it has since launched a clampdown and other Latin American teams, including Argentina and Chile, have also been fined.