I really am a fan of his: Erdoğan reveals favorite between Messi and Ronaldo 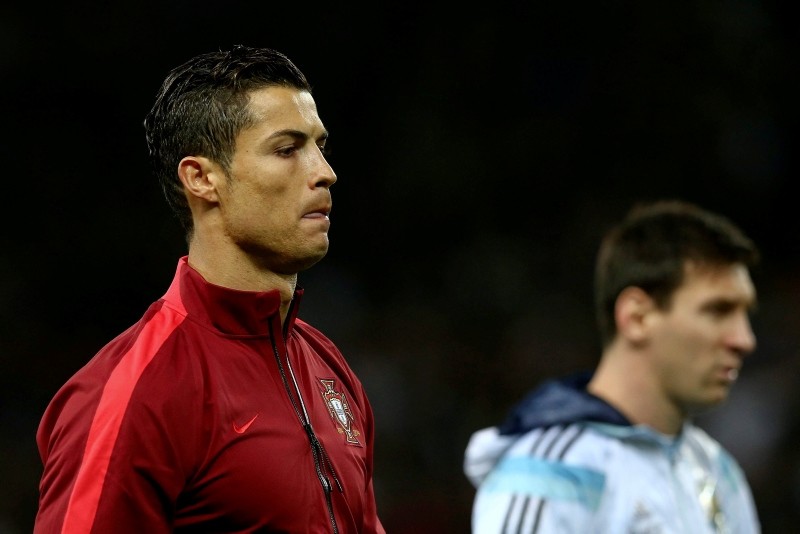 Portugal's Cristiano Ronaldo, left, and Argentina's Lionel Messi before the international friendly soccer match between Argentina and Portugal at the Old Trafford in Manchester, U.K., Nov. 18, 2014. (EPA Photo)
by Daily Sabah Jun 19, 2018 12:00 am

President Recep Tayyip Erdoğan has dived into the eternal debate among football fans: Messi or Ronaldo.

Speaking at the "Youth and Technology Meeting" organized by the Turkish Aerospace Industries late Monday, Erdoğan did not hide the fact that between Messi and Ronaldo — arguably two of the best players in football history — he fancied the Portuguese.

"I really am a fan of Ronaldo. If you are asking, 'Ronaldo or Messi?' I see Ronaldo much more distinctly. Most particularly, scoring a hat-trick in that match [against Spain at the World Cup] was very important," Erdoğan said.

"His performance, character, faith and, above all, his [stance] on the Palestinian issue are very important. I applaud him for that."

The president also commented on the World Cup favorites' rocky start at the tournament in Russia.

"I first said Germany [would be the winner], but was mistaken. Germany was defeated in the first game, and their job became a little harder now. All the strong ones are being beaten right now. Germany is defeated, Brazil's state is obvious. Mexico is curious. I do not know if they will be able to continue like that," he said.

The 2018 FIFA World Cup kicked off in Russia last week and will continue until July 15.

On Tuesday, Russia and Egypt will face off in the first match of the Matchweek 2 of the group stage.