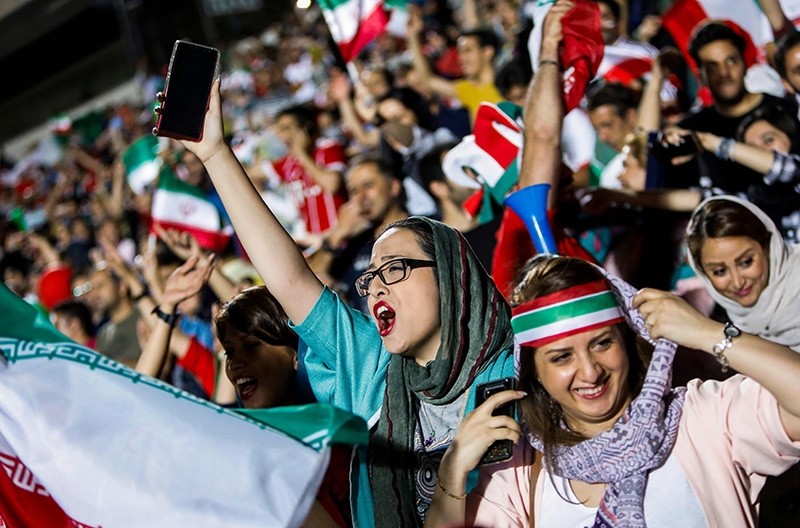 Iranian football supporters wave their national flags as they cheer for their national team during a screening of the Russia 2018 World Cup Group B football match between Iran and Spain in Azadi stadium in Tehran on June 20, 2018. (AFP Photo)
by Daily Sabah with DPA Jun 21, 2018 12:00 am

In defeat, Iranian women experienced a victory on Wednesday, with Iran's 1-0 World Cup loss to Spain marking the first time in 40 years that women have been legally permitted to follow a football match in a stadium in the country.

The game was in Kazan, Russia but Iranian women attended a public viewing of the match in Tehran's Azadi Stadium.

After national and international protests against the long-standing ban on women attending stadiums, the Iranian authorities permitted women access to the stadium to watch the game on a big screen.

However, the momentous occasion was almost upset at the last minute with police wanting to cancel the entire viewing, citing "infrastructural deficiencies."

The police eventually relented after the Ministry of the Interior gave the instruction to let everyone into the stadium.

"We are always powerless to two things," said one police officer at the arena, according to social media. "Women and football."

Most of the women following the game on television inside the arena were able to directly experience a stadium atmosphere for the first time.

"I did not know that it was so much fun to roar for two hours and be close to a heart attack," a woman wrote on Twitter.

"They are the ones who won tonight. Hopefully the first of many," he tweeted alongside photos of the bedecked Iranian women in Azadi Stadium.

They are the ones who won tonight. Hopefully the first of many. https://t.co/ftnMwegZjz

Activists are confident that this could be the impetus to a complete lifting of the women's stadium ban.

Women in Iran have been banned from entering stadiums since the Islamic Revolution in 1979, with ultra-conservative clerics arguing that women should not witness frenetic male fans and their pithy slogans.

Five women snuck their way into the Azadi Stadium in May, using fake beards and wigs to disguise themselves as men.

In March, 35 women were detained at a stadium for trying to enter to watch a match.

Iran may have lost but still have an outside chance of progressing to the World Cup last 16.