Argentina on brink as Messi overshadowed by Ronaldo 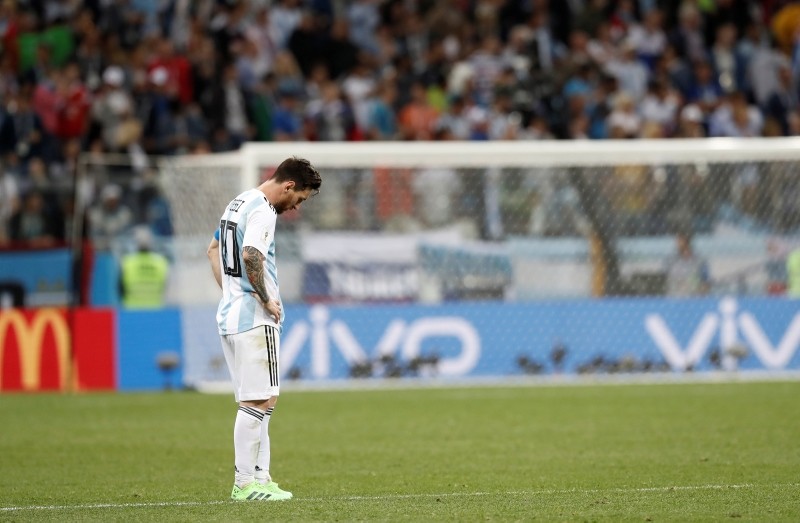 Argentina risks an early World Cup exit after a 3-0 humbling at the hands of Croatia while Messi has been overshadowed by his main rival Cristiano Ronaldo, who scored all four of Portugal's goals so far

Jorge Sampaoli looked ashen-faced after Argentina succumbed 3-0 to Croatia and the coach must now find a spark of inspiration from somewhere to avoid a shock early exit from the World Cup. Whether that piece of genius comes from Lionel Messi remains to be seen after he was again subdued in their second Group D game.

Qualification for the last 16 is no longer in the hands of the Albiceleste. Coach Sampaoli was asked by reporters on Thursday if he was ashamed of his side's performance and was told that he was held responsible by 40 million Argentinians for picking Willy Caballero, the goalkeeper whose calamitous error allowed Ante Rebic to set up Croatia's victory. But the most damning criticism of Sampaoli came not from his country's press but from his opposite number.

Croatia's victorious coach, Zlatko Dalic, had earlier been grilled on Sampaoli's preparations for the game. His answers were revealing. First, he said that there had been no surprise in Argentina's switch from a 4-2-3-1 formation to the 3-4-3 that was so brutally exposed by Croatia.

"We had good scouts analyzing Argentina," Dalic said. "We knew that they would play 3-4-3." That allowed him to focus on isolating Argentina's back three. They reacted poorly to the pressure, with Manchester City's Nicolas Otamendi in particular looking anything but a top-class defender during a nervous first half-hour.

"We knew that the back three of Argentina were a bit weak and would break under pressure," Dalic said. Croatia exposed the gap between Argentina's right-sided center-half Gabriel Mercado and right midfielder Eduardo Salvio as early as the fourth minute, while similar space on Argentina's left was exploited by Croatian right-back Sime Vrsaljko. While Dalic's team had trained in Nizhny before the game, Sampaoli had shunned the opportunity. "Every coach has their different way of working," Dalic said. "This practice session was welcome for us."

And, while Sampaoli had talked at length beforehand about tactics, saying that he wanted to find a system that would free up Messi, Dalic said that he had allowed his players to relax. "These past days we haven't done tactics," he said. "I wanted to relieve them of the stress. I wanted them to go onto the pitch and enjoy it."

They certainly enjoyed it more than Messi. Argentina's superstar cut a forlorn figure at kick-off, rubbing his face as if he'd rather have been curled up on the couch than playing in a near must-win World Cup game. Dalic called him "the best player in the world," but there has been precious little evidence of that in Russia. The Barcelona man has been overshadowed by his Real Madrid rivals, with the all-action Cristiano Ronaldo scoring all four of Portugal's goals so far and Croatia's Luka Modric ruling the roost on Thursday.

Having won the Copa America with Chile, Sampaoli is no mug. But he has been unable either to liberate Messi or to give his team a discernible identity. He is now clinging to his job. Argentina, who drew 1-1 with Iceland in their opener, next play Nigeria on Tuesday and may well need a favor from Croatia, who play Iceland in their last game. But they shouldn't count on that. With Croatia already through to the round of 16, will Dalic rest most of his top players against Iceland? "Yes, I will," he said.