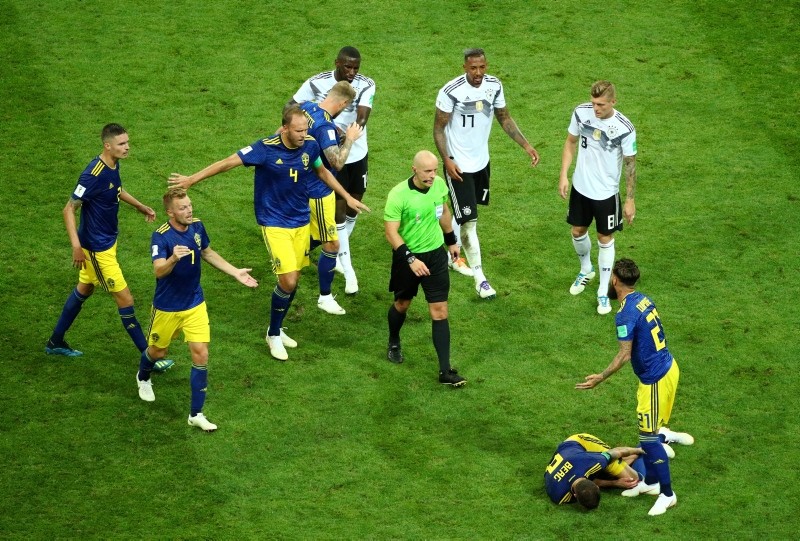 A free kick goal by Toni Kroos in the fifth minute of stoppage time managed to save 10-man Germany against Sweden and keep the defending champions in the running to defend their World Cup title on Saturday in Sochi.

Ola Toivonen shocked Germany with the opening goal in the 32nd minute before Germany equalized in the 48th minute through Marco Reus.

Germany went a man down in the 82nd minute as center back Jerome Boateng was booked a second time. But Kroos still came up with the game-winner five minutes into stoppage time.

The disappointing performance by the German team was blamed on dropping its star player Mesut Özil has been dropped from the starting lineup. This is the first time in Özil's career where he was dropped in a major international championship game.

Özil started every game in the World Cup in 2010 and was one of the stars of Germany's winning squad in Brazil four years ago.

Özil and Ilkay Gündoğan, both of Turkish origin, experienced pressure and insult for weeks from German fans after posing with Erdoğan during the president's visit to London last month.

Germany and Sweden are both even on three points in Group F behind Mexico with six points and ahead of South Korea with zero points. That would mean the decision will come on Wednesday when Sweden faces Mexico in Yekaterinburg and Germany plays against South Korea in Kazan.

Germany threatens to become the fifth holders in the last six World Cups to be bounced in the group stage of the following World Cup - after France in 2002, Brazil in 2006, Italy in 2010 and Spain in 2014.