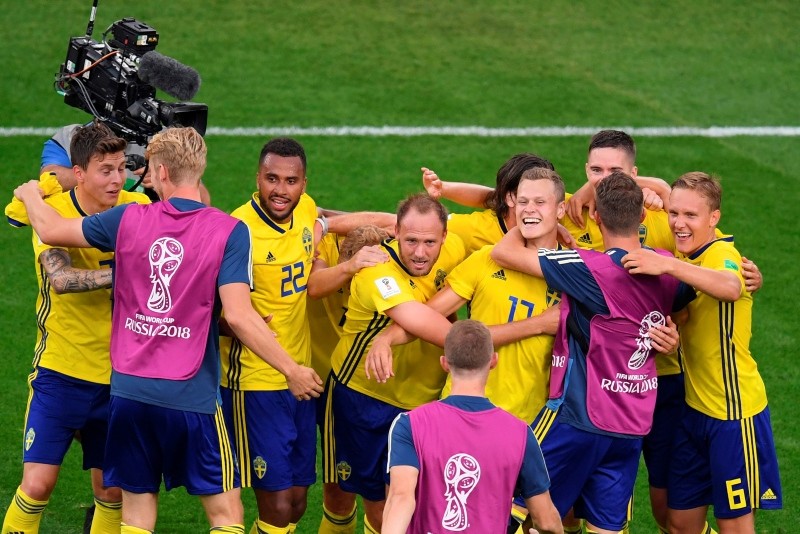 Sweden's players celebrate after the Russia 2018 World Cup Group F football match between Mexico and Sweden at the Ekaterinburg Arena in Ekaterinburg on June 27, 2018. (AFP Photo)
by Associated Press Jun 27, 2018 12:00 am

Sweden was so dominant against Mexico at the World Cup that the best Mexican plays of the night were made 600 miles away by South Koreans.

The Swedes rolled to a 3-0 rout Wednesday, never challenged in the second half, overtaking Mexico to win Group F just four nights after a gut-wrenching last-minute loss to Germany. The result, combined with South Korea's 2-0 upset of the Germans, meant Sweden and Mexico — the group runner-up — advanced.

Sweden makes its first appearance in the knockout stage since 2006. Mexico plays in the round of 16 for the seventh straight World Cup, with its fans desperate for its first quarterfinal appearance in 32 years — the elusive "quinto partido," or fifth game.

Sweden didn't want to focus on getting revenge by helping eliminate Germany, which got some favorable calls in a tense 2-1 victory over the Swedes on Saturday night.

"We grew another little bit," Sweden coach Janne Andersson said. "I am not going to sit here and gloat having won a match or boast about a win. We don't want to stir things up too much."

Mexico's Edson Alvarez had an own goal in the 74th minute to put the game out of reach at 3-0.

It capped an emotional week for the Blue-Yellow. The team made a unified statement Sunday defending teammate Jimmy Durmaz from criticism and racist attacks after his late foul led to a free kick that won the game for Germany.

"A few days ago we lost in the last minute and we were very disappointed, and now we come back and beat Mexico," Augustinsson said. "I think we deserved to win the group, and Mexico deserved to be second."

As Sweden's lead grew, Mexican fans paid more attention to the other game, rooting against Germany, which could have passed Mexico with a victory depending on tiebreakers.

El Tri's faithful could be seen frantically checking their phones for scoring updates from Germany's game soon after Sweden's second goal. After South Korea's first goal, they let up a loud cheer and tossed drinks in the air as their chances of advancing improved.

Great organization and some fortunate timing played out in the second half for Sweden. Augustinsson scored when the ball luckily landed in his path following a mistimed shot from Viktor Claesson popped up to his teammate.

After Granqvist's penalty kick, Sweden took total control. Alvarez's own goal occurred when he was trying to prevent Ola Toivonen from connecting with the ball, deflecting it with his arm past Ochoa.

"We just need to move on," Ochoa said. "This is the World Cup. We can't pull it out of our pocket, it's not going to be easy and I think it's a good lesson for what's to come."

Said coach Juan Carlos Osorio: "We have to say we qualified because we beat Germany and Korea. However and nevertheless, I am very hurt."

Alvarez's own goal was the seventh overall of the World Cup, one more than the previous record in 1998.

Mexico's Jesus Gallardo was called for a yellow card just 13 seconds in — believed to be the fastest in World Cup history — setting up the first of two quick set-piece opportunities Sweden could not take advantage of.

Sweden wins Group F and will face the runner-up of Group E (Brazil, Switzerland or Serbia) in St. Petersburg on Tuesday.

As the runner-up, Mexico meets the Group E winner Monday in Samara.

Sweden didn't panic despite missing early chances to score. The Swedes stayed crisp in their exchanges and it helped them find seams in El Tri's defense.

Mexico will lament its missed chances early. Its aggressive style did open up some counterstrike chances for Sweden.

Defender Hector Moreno got his second yellow card of the tournament and misses Mexico's next game. Sweden's Sebastian Larsson, who was carted off in the second half with head injury, also received a second yellow and will also be suspended.