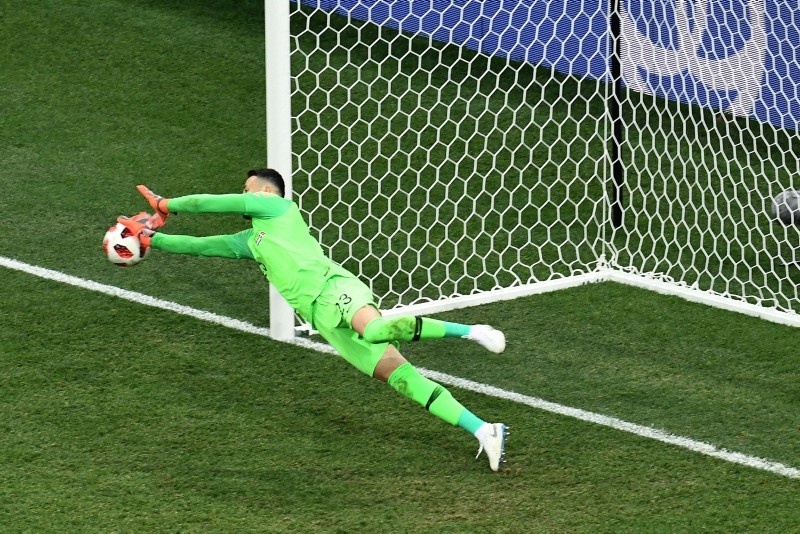 Croatia's Danijel Subasic saves a penalty from Denmark's Christian Eriksen, not pictured, during the penalty shootouts of the 2018 World Cup round of 16 match at the Nizhny Novgorod Stadium in Nizhny Novgorod, July 1, 2018. (AFP Photo)
by daily sabah
Jul 02, 2018 12:00 am

The 2018 World Cup round of 16 matches Sunday have failed to produce a winner in regular and extra time, so both were decided by penalties.

Football fans around the world saw seven incredible kicks from the spot saved by goalkeepers. Some watchful viewers, however, noticed that goalkeepers often broke the rules.

15 times out of 19, goalkeepers left their goal lines before the ball was kicked, which is not allowed and "illegal" according to FIFA's rules.

Ideally, the referees should have ruled for a retake of the spot kicks, but for some reason decided not to enforce the rule.

Russia stunned Spain in the first round of playoffs by securing a 1-1 draw in 120 minutes and then winning on penalties thanks to Akinfeev's two saves.

The penalty shootout between Denmark and Croatia turned into a "battle of goalies" in which Subasic prevailed with three saves against Schmeichel's two.