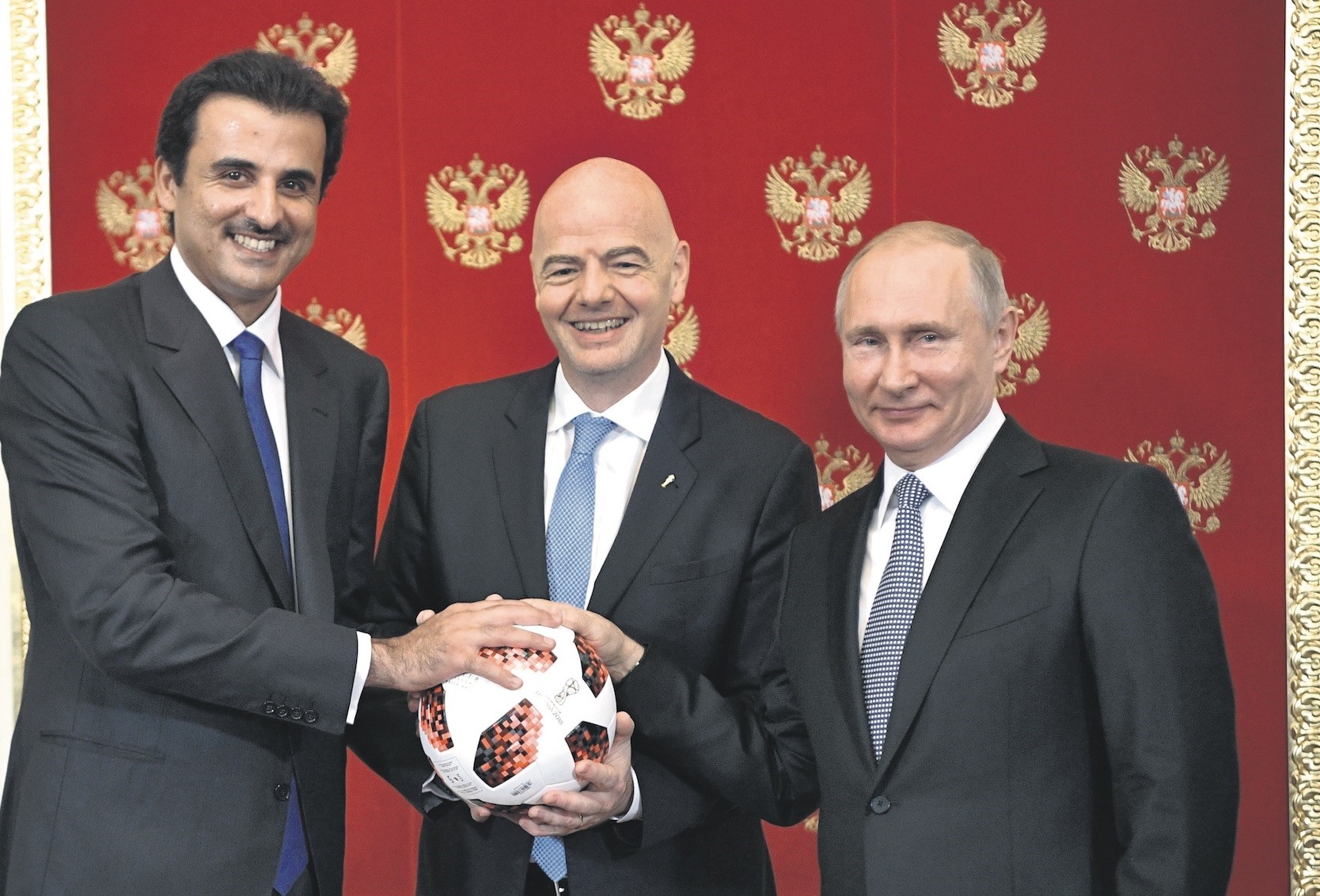 The Emir of Qatar Sheikh Tamim bin Hamad al-Thani (L), FIFA President Gianni Infantino and Russian President Vladimir Putin pose for a photo during their meeting in the Kremlin in Moscow, July 15.
by Compiled from Wire Services
Jul 16, 2018 12:00 am

Russian President Vladimir Putin handed over the mantle of World Cup host to the emir of Qatar, whose country will stage the 2022 edition of the tournament

Germany came out of its shell, South Africa exceeded expectations and Russia changed negative perceptions when they all hosted the World Cup but just what will unfold in four years' time when the tournament goes to Qatar is anyone's guess. There is only one certainty - it will be an event like no other. The small gulf kingdom, which stretches only 180km from one end to the other, is unlike any previous host with little sporting tradition, a population of just over 2.5 millions, has never played at the World Cup and is so hot in the customary mid-year window for the tournament that it has moved towards the end of the year. The first Arab country to host the event are planning eight new stadiums for the tournament, with one completed, two more due this year and the rest scheduled to be finished by 2021. None is more than 35km from the centre of the capital Doha and all serviced by a brand new metro system.

"We are ready based on the path we have set," said Hassan Al Thawadi, the secretary-general of the Qatar 2022 organising committee, in Moscow with a delegation of more than 100 officials shadowing the Russians. FIFA have confirmed that the tournament will be hosted from Nov. 21-Dec. 18, 2022, but whether it will be a 32-team event or expand to 48 remains to be decided.

"It will be a common decision taken between FIFA and Qatar and we are now studying the feasibility of expanding it to a 48-team World Cup. However, all preparations are on the basis of 32 teams," Al Thawadi added. Changing the timing of the tournament will disrupt major league seasons and has set FIFA on a collision course with the powerful European clubs but the Qataris are seeking to put a positive spin on the change, claiming it could lead to more exciting football.

"Players will be mid-season, not at the end of their seasons, at a time when they can be at their peak of their performance levels," Al Thawadi said. Qatar will also relax laws on the consumption of alcohol, planning areas for visiting fans where alcohol can be consumed to ensure they replicate the party atmosphere of past tournaments.

"We are well aware of the wonderful opportunity the World Cup presents to change opinions and deflect stereotypes. We will be a welcoming nation," he added.

Meanwhile, Russian President Vladimir Putin yesterday handed over the mantle of World Cup host to the emir of Qatar, whose country will stage the 2022 edition of the tournament. The ceremony marked a handover from the world's largest country by landmass to one of the smallest. Qatari Emir Sheikh Tamim bin Hamad al-Thani joined Putin and FIFA chief Gianni Infantino at a Kremlin ceremony. "Russia is handing over the relay baton for hosting the FIFA World Cup to Qatar," Putin said. "We are proud of what we did for fans of this wonderful sport. We ourselves, the whole country, got an enormous amount of pleasure from interacting with soccer, with the world of soccer, with the fans who came here from all over the globe."

"I'm sure that our friends from Qatar will be able to host the 2022 FIFA World Cup on the same high level. We are, of course, ready to share the experience we acquired in holding the World Cup this year, along with our friends," Putin said. At the climax of the ceremony, Putin handed an official World Cup ball to Infantino, who then handed it on to the emir. The Qatari emir said his country would apply all its efforts to making a success of the 2022 World Cup. "We hope to overcome all the difficulties," he said.