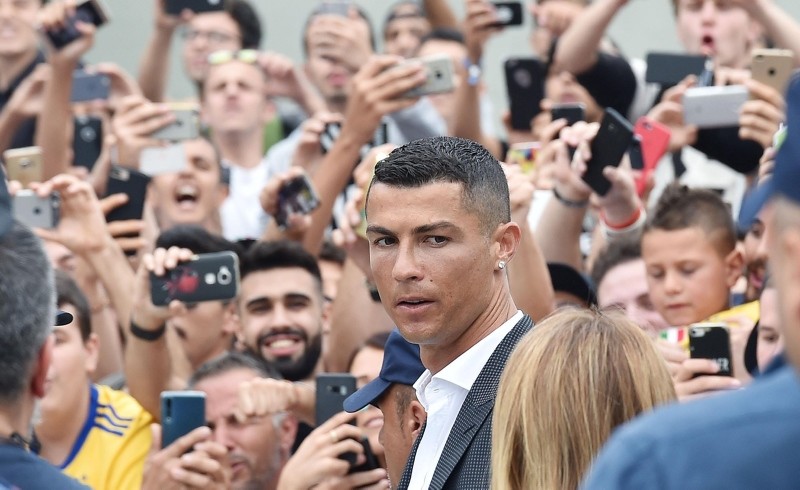 Cristiano Ronaldo says he wants to make history for his new club Juventus and hopes to finally lead it to Champions League glory.

"After what I did in Manchester and Madrid, I want to also leave a mark on the history of Juventus," the former Manchester United and Real Madrid player says in a press conference.

"The Champions League is a very difficult competition to win, obviously I hope to help," and "I hope to bring some luck to this team," he says.

Joining Juventus from Real Madrid was "an easy decision" because the Italian champions are "one of the best teams in the world" and are "used to winning."

Hundreds of fans gathered outside the Allianz Stadium in Turin from early morning singing "Ronaldo, bring us the Champions (League)" as the European competition's most lethal striker of all time emerged from the club's medical center to sign autographs and shake hands amid raucous chants.

Juventus later published a video of Ronaldo chanting "Juve, Juve" as he went back inside to undergo tests.

Ronaldo fever hit Turin after the announcement last week of his 100 million-euro ($117 million) transfer from European champions Real Madrid. Italian media reports the attacker will earn 30 million euros a season and the deal will cost Juve a total of 350 million euros.

Many of the youngsters who came out to greet their new hero were wearing Juventus shirts emblazoned with "Ronaldo" and the number 7, which have been selling quickly in Turin.

Others wore t-shirts with the message "Bem-vindo" -- "welcome" in Portuguese -- which 5,000 shopkeepers put up posters ahead of Ronaldo's arrival late Sunday.

One local ice-cream parlour has even created a "CR7" cone, featuring a Portuguese cherry liquor and chocolate shavings.

The mood of joy was not universal. The costly signing upset leaders of one minority union at an automobile plant in southern Italy owned by Fiat-Chrysler -- in turn owned by the same holding company as Juventus.

They called a protest strike for Monday but only five of the plant's 1,700 workers turned out at a protest in support of the action dismissed as a "stunt" by bigger unions representing the workers in Melfi, in the Basilicata region.