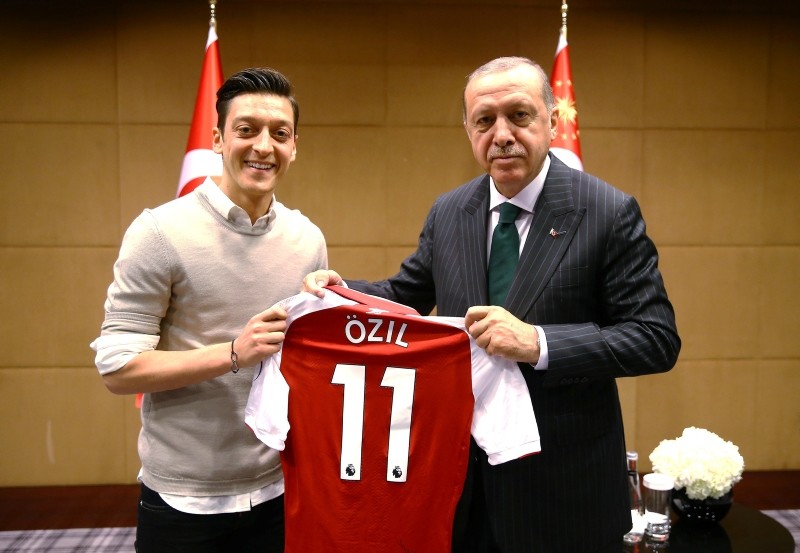 After monthslong alienation and pressure from German people, media outlets and even politicians over a photo with President Recep Tayyip Erdoğan, Arsenal star Mesut Özil finally broke his silence Sunday and said he had no regrets about the photo.

Özil, a German national of Turkish descent, met with President Erdoğan several times and even watched a match between Germany and Turkey in Berlin with then-Prime Minister Erdoğan and Angela Merkel in 2010. However, since his recent meeting with Erdoğan, along with İlkay Gündoğan — a teammate also of Turkish descent — in London during the president's visit to the United Kingdom in May, the German international has been under fire from the German media and has been subjected to racist abuse and attacks.

Özil said in a post shared on his official social media accounts that the past couple of weeks have given him "time to reflect and time to think over the events of the last few months."

"Like many people, my ancestry traces back to more than one country. Whilst I grew up in Germany, my family background has its roots firmly based in Turkey. I have two hearts, one German and one Turkish," Özil wrote. "During my childhood, my mother taught me always to be respectful and to never forget where I came from, and these are still values that I think about to this day."

Commenting on the picture taken with the Turkish president in London, Özil said, "I'm aware that the picture of us caused a huge response in the German media, and whilst some people may accuse me of lying or being deceitful, the picture we took had no political intentions."

"As I said, my mother has never let me lose sight of my ancestry, heritage and family traditions."

The player reiterated that the meeting was not about politics or elections, but rather it was "about respecting the highest office of my family's country."

Özil stressed that the meeting was not an endorsement of any policies, but the two only spoke about the topic they usually discuss: football.

"Although the German media have portrayed something different, the truth is that not meeting with the President would have been disrespecting the roots of my ancestors, who I know would be proud of where I am today," the statement said.

Özil expressed confidence that having respect for political office is a view both the queen and British Prime Minister Theresa May shared when they hosted Erdoğan in London.

"Whether it had been the Turkish or German president, my actions would've been no different," he said.

"Whatever the outcome would've been in the previous election, or the election before that, I would have still taken the picture."

In the second part of his statement titled "Media & sponsors" and released several hours later, Özil said "certain German newspapers" were using his background and picture with President Recep Tayyip Erdoğan before the 2018 World Cup "as right-wing propaganda to further their political cause."

Özil said papers had not criticized his performances in Russia but his Turkish ancestry and this "crosses a personal line that should never be crossed, as newspapers try to turn the nation of Germany against me."

He also highlighted German media's hypocrisy, pointing out that Lothar Matthaus — who harshly criticized Özil for his performances at the World Cup — was not given the same treatment after he met with Russian President Vladimir Putin.

"Despite his role with the DFB (German national team), they have not asked him to publicly explain his actions and he continues to represent the players of Germany without any reprimand. If the media felt that I should have been left [out] of the World Cup squad, then surely he should be stripped of his honorary captaincy?" Özil asked.

"Does my Turkish heritage make me a more worthy target?"

The player also said he had been dropped him from promotional activities by a sponsor and a scheduled visit to his former school in Gelsenkirchen had been canceled at the request of the school, which explained that it "feared the media," especially with the "right-wing party in Gelsenkirchen on the rise."

"Despite being a student of theirs back when I was younger, I was made to feel unwanted and unworthy of their time," he said.