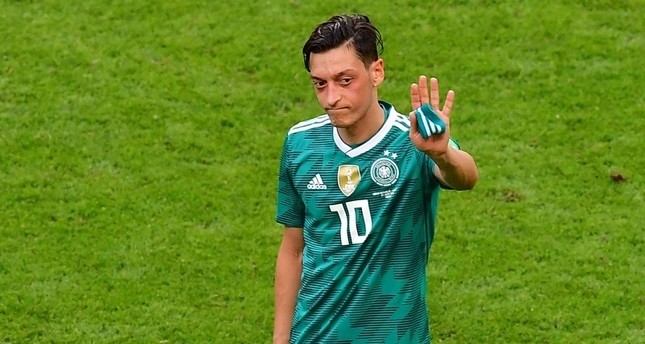 Mesut Özil announced Sunday that he will not play for the German national team after being subjected to racial abuse for his Turkish origin and scapegoated for Germany's failure in the Russia 2018 World Cup after a picture he took alongside President Recep Tayyip Erdoğan.

Özil, a German national of Turkish descent, said the racist attacks by the German Football Association (DFB) and others made him feel unwanted and so he will no longer play for Germany "whilst I have this feeling of racism and disrespect."

In a three-part statement posted on the Arsenal midfielder's social accounts, Özil said in the eyes of DFB President Reinhard Grindel and his supporters, "I am German when we win, but I am an immigrant when we lose. This is despite paying taxes in Germany, donating facilities to German schools and winning the World Cup with Germany in 2014, I am still not accepted into society."

Özil pointed out while his teammates Roman Podolski and Miroslav Klose are never referred to as German-Polish, he was called German-Turkish.

"Is this because it is Turkey? Is it because I'm a Muslim? By being referred to as German-Turkish, it is already distinguishing people who have family from more than one country. I was born and educated in Germany, so why don't people accept that I am German?" Özil said.

The player told about the racist treatment he has received ever since the photo made the headlines, from Chief of German Theatre Werner Steer telling him to "piss off to Anatolia," a Turkish region where many Turkish immigrants originated from, to a German football fan calling him a "Turkish pig."

"These people have used my picture with President Erdoğan as an opportunity to express their previously hidden racist tendencies," he wrote.

The player said in the first part of his lengthy statement that the meeting was not about politics or elections, but rather it was "about respecting the highest office of my family's country."

Özil stressed that the meeting was not an endorsement of any policies, but the two only spoke about the topic they usually discuss: football.

"Although the German media have portrayed something different, the truth is that not meeting with the President would have been disrespecting the roots of my ancestors, who I know would be proud of where I am today," the statement said.

Özil met with President Erdoğan several times and even watched a match between Germany and Turkey in Berlin with then-Prime Minister Erdoğan and Angela Merkel in 2010. However, since his recent meeting with Erdoğan, along with İlkay Gündoğan — a teammate also of Turkish descent — in London during the president's visit to the United Kingdom in May, the German international has been under fire from the German media and has been subjected to racist abuse and attacks.