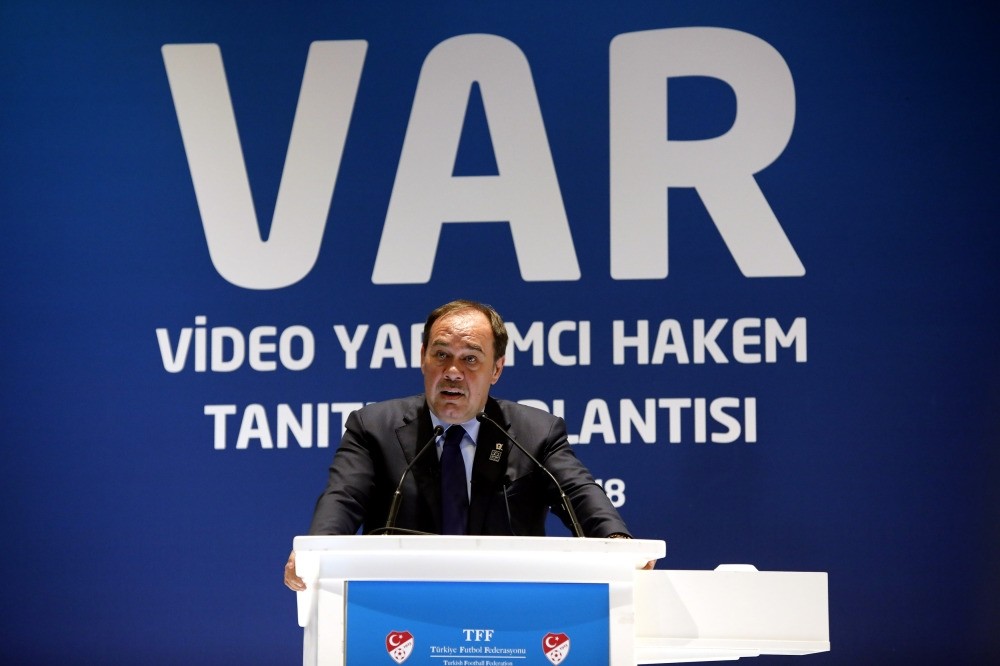 Turkey's football federation announced its top league will use the video assistant referee system in the 2018-19 season. Federation President Demirören said, ‘After a new political system in Turkey, Turkish football is also beginning a new era'

Since the beginning of the Turkish football's top flight Super League in 1959, Turkish football fans have been witnessing harsh discussions on referee mistakes. Some said the referees' performances were poor, some accused referees of deliberately favoring some teams. Now a new system will go into effect with which all sides hope these kind of discussions will come to an end: the Video Assistant Referee or in short VAR.

Turkish Football Federation (TFF) President Yıldırım Demirören said that a new era in Turkish football is beginning with VAR's introduction in the 2018-19 season. In an introductory meeting held in the Hasan Doğan National Football Teams Camping and Training facilities, the new VAR system was introduced on Wednesday in the presence of Youth and Sports Minister Mehmet Muharrem Kasapoğlu, TFF President Demirören, the Foundation of Union of Clubs and Beşiktaş President Fikret Orman and the presidents of other Super League clubs.

Referring to the Turkey's transition to an executive presidential system of government, Demirören said, "In a new Turkey, our football is beginning a new era with the new technological VAR system. With the new approach, I believe that we will experience the long-awaited fair system in Turkish football. We will become a leading force in fair play. We aim to establish a peaceful environment in football. My biggest wish is the VAR system to contribute this."

"As we have seen in the 2018 World Cup, VAR reduces referee faults to a minimum. We hope that our referees won't be targeted anymore for their decisions. We wish that all of you support this new system in order for it to be successful. It will break new ground in our football. Federation representatives attended several international VAR meetings. The Central Referee Committee tested the system in 180 games during the course of a year. We have built a VAR center in Riva with a huge investment," he added. "So we must be patient because it is in football's nature to make mistakes. We must be tolerant until the new system clicks into place."

Turkish Youth and Sports Minister Mehmet Kasapoğlu also made it clear that the final decision will always be given by the head referee.

"Humans matter the most, technology follows. We have implicit trust in the referees. Turkish football, with all of its institutions and establishments, is ready to implement the VAR system. All the necessary technical and infrastructure works have been completed. Turkish football has been preparing for VAR since 2016," he said.

On July 6, the TFF announced its top league will use the VAR system which has made a huge impact at the World Cup. The system will be used both in the top flight Spor Toto Super League and also in the League 1 play-off matches, the TFF said in a statement.

VAR has been a major talking point at the World Cup in Russia, where it has been used in international football's top competition for the first time and played a decisive role in several games. Its use in Turkey is expected to be hugely significant with the Super League's increasingly competitive and tense games in fractious atmospheres often decided by a single contentious decision.

VAR has been used to varying degrees of success in Serie A and the German Bundesliga, while FIFA used the system at the Confederations Cup in Russia last year. But the English Premier League voted in April not to use the system during the 2018-19 Premier League season after controversial trials in English cup competitions.

France's Ligue 1 will also use the VAR system in every game in the coming season, the French football federation said on Wednesday.

VAR technology is used in what are considered "game-changing" situations, such as a goal, penalty or red card, and can also be used to help referees with cases of mistaken identity.