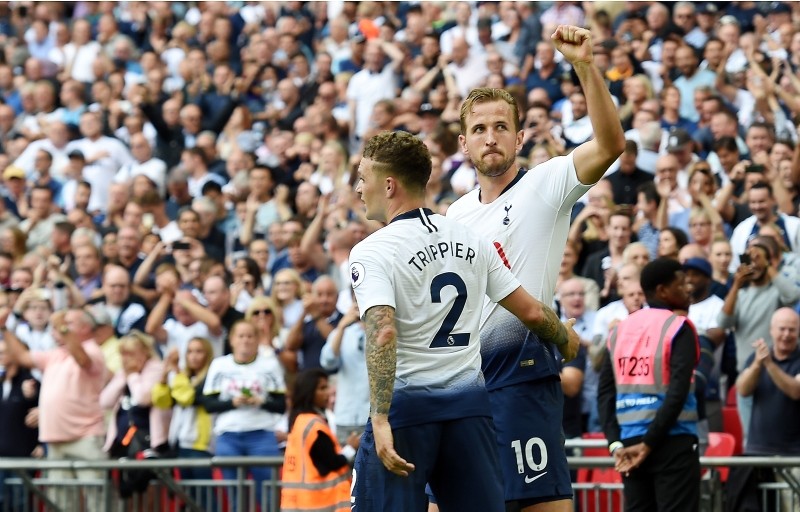 Harry Kane finally scored a Premier League goal in August as Tottenham beat Fulham 3-1 on Saturday for its second straight win to open the English season.

So prolific throughout the rest of the season, the England striker had never scored in the opening month of a league campaign but put that right in his 15th top-flight game in August.

Kane struck in the 77th minute at Wembley Stadium, three minutes after international teammate Kieran Tripper picked up where he left off at the World Cup with a curling free kick to put his side ahead for the second time.

Lucas Moura gave Spurs a 1-0 lead with a left-footed finish from just inside the area shortly before halftime, and Aleksandar Mitrovic equalized for the Premier League newcomer in the 52nd.

The Serbian missed Joe Bryan's original cross from the left, but when Ryan Sessegnon played the ball back across goal, Mitrovic headed home from a meter out while on the ground.

Fulham had played at England's national stadium more recently than Tottenham, which is playing its home matches there while White Hart Lane is being rebuilt. Fulham won the second-tier League Championship playoff final at Wembley at the end of May.

Tottenham could have been two goals ahead with only eight minutes gone as Moura wasted two great opportunities. The first came when he put a header from Ben Davies' cross wide from inside the six-yard box and then his heavy touch, when through on goal, allowed Fulham goalkeeper Fabri to intercept and get fouled in the process.

Eventually, Tottenham's pressure told as Moura atoned for those misses two minutes before the break by running onto a poor clearance and caressing a first-time effort into the far corner for his first Premier League goal.

Mitrovic had fired a warning when his low shot from the edge of the area struck the post, and he found the net minutes later.

Tottenham regrouped, Dele Alli saw an effort cleared off the line while Kane sidefooted Eric Dier's cross against the crossbar.

Trippier's moment of magic came in the 74th when the right back — in his first game since the World Cup semifinal against Croatia when he also scored a free kick — sent a 30-yard shot over the wall and into the corner.

Kane's goal came when he cut inside from Erik Lamela's surging run and curled the ball into the bottom corner.