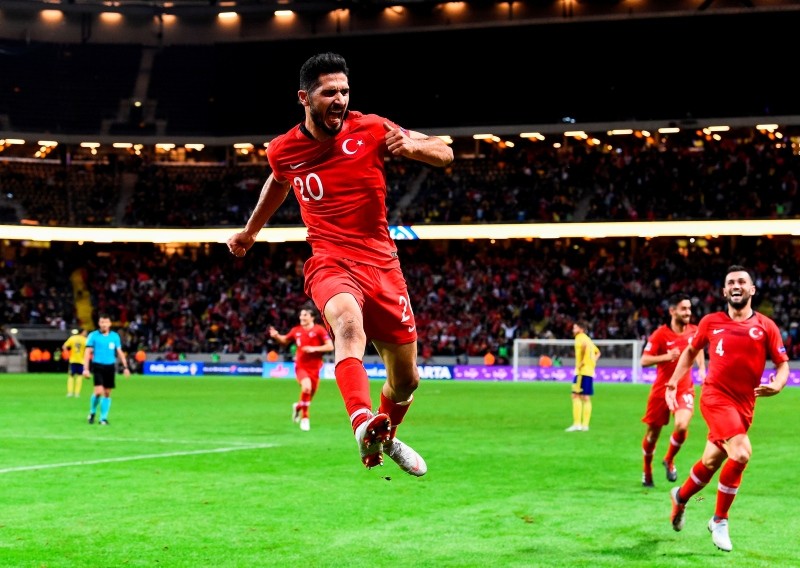 Turkey's midfielder Emre Akbaba celebrates after scoring a goal during the UEFA Nations League football match between Sweden and Turkey at the Friends Arena in Solna, on September 10, 2018. (AFP Photo)
by Compiled from Wire Services Sep 11, 2018 12:00 am

The Turkey national football team has been under fire, but raised hope for the future after staging a miraculous comeback against Sweden

Turkey's substitute Emre Akbaba got two late goals to snatch a stunning 3-2 win over Sweden in the Nations League as the visitors recovered from two goals down at the Friends Arena on Monday.

The midfielder first rifled home Cenk Tosun's pass to level the score two minutes from time and then sent a glancing header past home goalkeeper Robin Olsen, sealing the comeback win to the delight of the thousands of Turkish fans in the crowd.

Turkey, who suffered a 2-1 home defeat by Russia in their opening League B Group 2 game and faced serious scrutiny from the media, started well and had lots of possession but the final ball into the box often lacked quality.

Sweden had taken the lead in their opening Nations League match when Isaac Kiese-Thelin scored 10 minutes before the break, flicking Viktor Claesson's cushioned header against the post before slotting home the rebound.

Claesson got on the scoresheet himself four minutes into the second half, drifting in from the left before releasing a rocket of a shot from distance that flew into the net.

The Swedes, whose defensive organization helped them reach the quarter-finals at this year's World Cup in Russia where they were defeated by England, had several chances to increase their lead, but Akbaba had the final say to secure the points.

Turkish coach Mircea Lucescu said, "This team is the future team. We should trust this team. We played well and won."

The fifth day of the tournament ended with eight matches.

Other results of the fifth day are as follows:

Portugal, without the resting Cristiano Ronaldo, took the points in League A Group 3 thanks to a 48th-minute goal from Andre Silva in Lisbon.

Italy coach Roberto Mancini made nine changes from the side that began the team's Nations League campaign with a 1-1 draw against Poland, but the Azzurri were second best against Portugal.

"Unfortunately we made some mistakes and must find a way to limit them," Mancini said.

"The boys did all they could, but we must find solutions to score, otherwise we will never win.

"We must develop. We have young players who are not used to playing at high level, but we knew that. In October we will be in better form, but we must find ways to score."

Kosovo got its first competitive win thanks to second-half goals from Arber Zeneli and Atdhe Nuhiu in Pristina to go top of D3 with four points from two games.