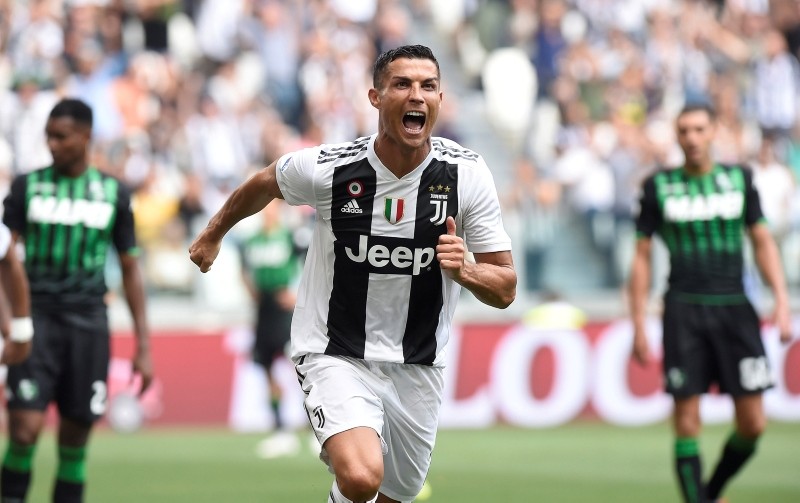 Juventus' Portuguese forward Cristiano Ronaldo celebrates after he scored his first goal since joining the club during the Italian Serie A football match Juventus against Sassuolo at the Juventus Stadium in Turin, Sept. 16, 2018. (Reuters Photo)
by Daily Sabah with Reuters Sep 16, 2018 12:00 am

Cristiano Ronaldo scored his first goal for Juventus in his fourth game for the Turin side when he was on target in their Serie A match against Sassuolo on Sunday.

Ronaldo turned the ball into the net from two meters to give Juventus a 1-0 lead in the 50th minute after a Sassuolo defender headed the ball against his own post and the rebound left the Portugal forward with an empty net.

Fifteen minutes later Ronaldo scored a brace following Emre Can's quick break through the middle of the park. The Portuguese fired a powerful shot just inside the far post after getting the ball on the left wing.

In the end of the match Ronaldo had several good opportunities to complete a hat-trick, but was unable to find the net.

Sassuolo then pulled one back in the stoppage time as Babacar netted a goal following Dell'Orco's precise cross.

The final scoreline was 2-1.

Ahead of the match Juventus coach Massimiliano Allegri has stuck his neck out and correctly predicted his star new player will score his first goal for the Turin side in Sunday's match against Sassuolo.

"He has been working well and I think that tomorrow he will score against Sassuolo," Allegri said in the buildup to the game.

Ronaldo completed his shock move to Juventus from Real Madrid in July.