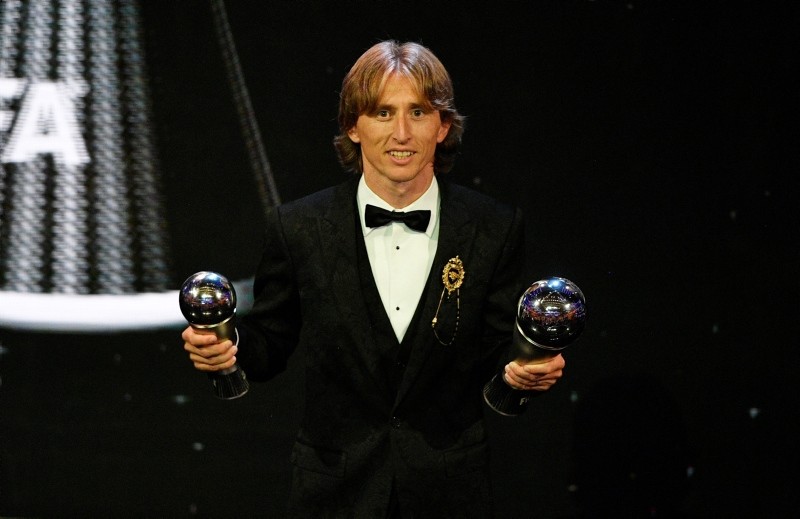 Luka Modric broke a decade of award dominance by Cristiano Ronaldo and Lionel Messi after being crowned world footballer of the year by FIFA on Monday.

Modric was voted FIFA's best player in the 2017-18 season after winning the Champions League for a fourth time in five seasons with Real Madrid and leading Croatia to its first World Cup final where it lost to France.

Messi and Ronaldo were the only winners of world soccer's main individual award from FIFA in various guises since 2008, both winning five titles each.

Messi didn't make the three-man shortlist and skipped the trip to London. And as a new dawn in FIFA's awards history broke inside London's Royal Festival Hall, Ronaldo also didn't turn up at the ceremony to be dethroned in person by his former Real Madrid teammate despite being in the final three alongside Liverpool forward Mohamed Salah.

"Two guys we don't know," actor Idris Elba, who hosted the show, said after revealing the world XI of the year and highlighting the absence of Messi and Ronaldo in the room.

Ronaldo, who left Madrid in the offseason to join Italian champion Juventus, was knocked out of the World Cup in the round of 16 with European champion Portugal.

At 1.72 meters (5-foot-8), Modric was doubted early in his career because of his height.

"These things were not a burden, they only further motivated me," Modric said at the World Cup. "You don't have to be a strapping lad to play football."

The cloud over the 33-year-old playmaker is that he was charged with perjury in March in an investigation linked to his transfer to Tottenham from Dinamo Zagreb in 2008. Prosecutors claimed Modric gave a false court statement last year about his financial deals with a former Zagreb director.

No French player was on the shortlist but Didier Deschamps was voted manager of the year after becoming only the third man to win the World Cup as a player and coach. The coach award in the women's game went to Reynald Pedros, the Frenchman who led Lyon to French league and Champions League glory.

Salah didn't leave empty-handed, picking up the Puskas Award for his goal in the Merseyside derby in December 2017.

Salah's goal in Liverpool's 1-1 draw against Everton was a mixture of strength and footwork. Receiving a pass from right back Joe Gomez, Salah shrugged off Cuca Martina, twisted inside Idrissa Gueye, and curled a left-footed shot around Ashley Williams and into the top corner.

Thibaut Courtois added the FIFA goalkeeper award to the Golden Glove he collected in Russia for helping Belgium to third place with three clean sheets.

German forward Lennart Thy won the fair play award after missing a game for Dutchside VVV-Venlo to help a leukemia patient. Thy donated blood to enable doctors to generate stem cells that could make a transplant possible for a leukemia patient and possibly save their life.

TEAM OF THE YEAR