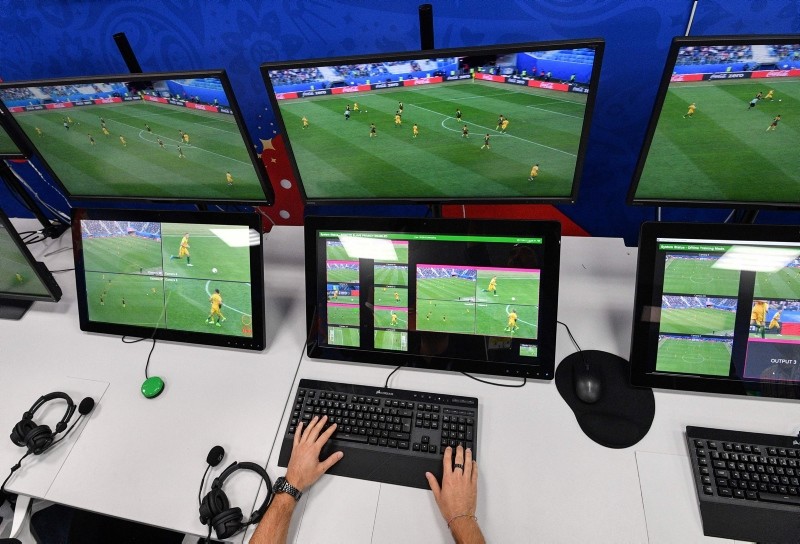 This file photo taken on June 9, 2018 shows a video assistant refereeing (VAR) operation room at the 2018 FIFA World Cup Russia International Broadcast Centre (IBC) in Moscow. (AFP Photo)
by Associated Press Sep 27, 2018 12:00 am
Video review will start being used to help referees next season in the Champions League, after the technology makes its UEFA debut at the Super Cup.

The UEFA executive committee also decided Thursday to approve the video assistant referee system for the 2020 European Championship and the 2020-21 Europa League.

The first UEFA game using technological help for referees is expected to be 14 months after FIFA introduced it at the World Cup in Russia. On Aug. 14 in Istanbul, the Super Cup game will pair this season's Champions League and Europa League winners.

The timetable was hinted at last month by UEFA president Aleksander Ceferin, who has been more skeptical than FIFA counterpart Gianni Infantino about the readiness of match officials to use the often-controversial protocols.

"We are confident that introducing Video Assistant Referees in August 2019 will give us enough time to put in place a robust system and to train match officials to ensure an efficient and successful implementation," Ceferin said Thursday in a statement.

On a breakthrough day for the system, the Asian Football Confederation said it wanted to use video review at "some games" in next year's Asian Cup. That tournament will be played from Jan. 5-Feb 1 in the United Arab Emirates.

The lack of video review in this season's Champions League was highlighted last week when Cristiano Ronaldo was given a red card for the first time in the marquee competition. He was handed a direct red card after he ruffled or tugged the hair of a Valencia defender who he appeared to believe had fallen to the ground too easily.

Without video images to consult, the referee consulted with his assistant behind the goal before sending off the Juventus forward.

UEFA's disciplinary panel met Thursday and decided Ronaldo should serve only a mandatory one-game ban for a red card with no additional punishment.

UEFA's introduction of video technology next season leaves unclear the future of those extra assistants beside each goal. That system was promoted by former UEFA president Michel Platini, who strongly opposed giving referees technological aids.