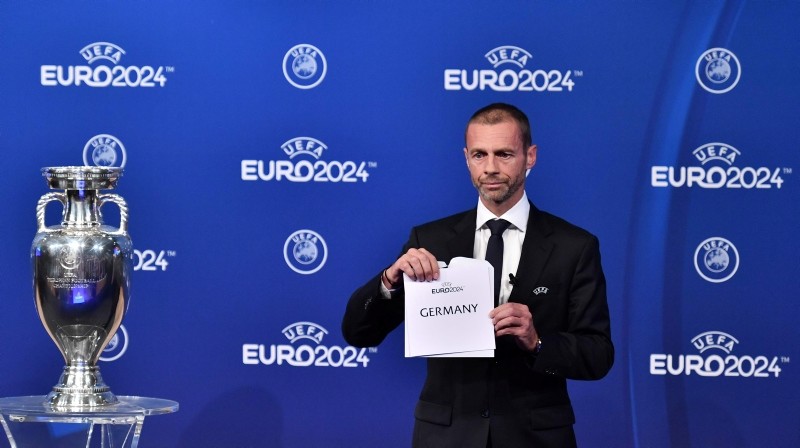 UEFA president Aleksander Ceferin announces that Germany was elected to host the Euro 2024 fooball tournament during a ceremony at the headquarters of the European football's governing body in Nyon on September 27, 2018. (AFP Photo)
by Daily Sabah with Agencies Sep 27, 2018 12:00 am

Ignoring the corruption and racism allegations, the European football body awarded Germany the right to host the EURO 2024. Germany previously staged the event as West Germany in 1988

Germany and Turkey were the only candidates to stage the 24-team tournament.

The committee voted 12-4 in favor of Germany, with one vote invalid, according to German football federation (DFB) chief Reinhard Grindel.

Turkey's Servet Yardımcı, the executive committee member, and Germany's Grindel, the UEFA Vice President, were not eligible to vote.

The vote at the UEFA headquarters in Nyon came after final 15-minute presentations from both bidders, and a technical evaluation report released last week which appeared to give Germany slightly better marks.

Germany hosted Euro 1988, and Munich is also among the venues for the pan-European 2020 edition. The nation has also staged two World Cups, in 1974 and 2006, giving it a big edge in experience to host such events.

"We had two very strong bids," Ceferin said, speaking of "two footballing nations" before he opened the envelope with Germany written on a piece of paper.

The outcome led to huge delight in the German camp including Grindel, national team coach Joachim Loew and 2014 World Cup-winning captain Philipp Lahm, who is designated to head the organizing committee.

The 24-team, 51 match-tournament is to be played in 10 German cities - Berlin, Cologne, Dortmund, Dusseldorf, Frankfurt, Gelsenkirchen, Hamburg, Leipzig, Munich, Stuttgart, with some 2.8 million tickets to go on public sale, according to the bid book.

Dusseldorf is the only one of those not used at the 2006 World Cup. The 2024 final is to be played in Munich or Berlin.

Before the voting, Germany's candidacy was overshadowed by allegations of racism and corruption. "The campaign to eliminate racism, discrimination and intolerance from football has become a major priority for UEFA in recent years-and the European body makes full use of its high-profile platforms to send out a key and unequivocal message: No to Racism," according to UEFA.

"No to Racism" – a campaign launched by UEFA to eliminate racism, discrimination and intolerance from football – was thought to shatter the hopes for Germany's EURO 2024 hosting bid.

Last Friday, the UEFA issued an evaluation of Turkey and Germany's Euro 2024 bids.

The report included feedback on the state of stadiums, as well as the political, social and environmental aspects, along with issues related to security, mobility, accommodation, and training facilities. According to the UEFA evaluation report, four out of 10 candidate host cities in Germany are not members of the European Coalition of Cities against Racism.

Over the recent years, Germany has been rocked by racism and bribery-related allegations and faced widespread protests.

In 2015, German weekly Der Spiegel claimed that Germany had paid 6.7 million euros in bribes to secure the 2006 World Cup. Wolfgang Niersbach, the then head of German Football Association (DFB), was forced to resign over the allegations. Later he was banned from football by FIFA for one year.

Özil said that Grindel failed to support him when he received hate mails, threatening phone calls, and racist comments on social media. The DFB head later admitted that he had not been supportive enough in Özil's case.