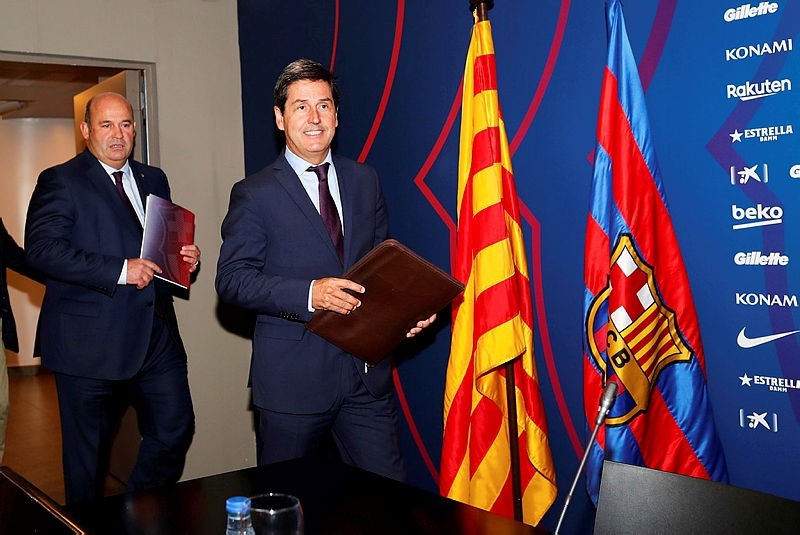 Treasurer of the Barcelona FC, Enrique Tombas (R), and Barcelona's CEO, Oscar Grau (R), arrive to a press conference to present last season's results as well as the budget passed for the next season in Barcelona, Spain, 02 October 2018. (EPA Photo)
by Daily Sabah with AP
Oct 02, 2018 12:00 am

According to the annual account announced by Vice President and Treasurer of the Board of Directors, Enric Tombas, the season ended on June 30 with $1.05 billion of net revenue with an after-tax profit of more than $12 million.

The club said in September that their goal was to reach $1 billion in revenues by 2021, which is the final year of the current board's mandate.

Oscar Grau, the club's CEO announced Tuesday that the budget of $1.10 billion has surpassed the revenue of last season, affirming the economic strength of the club.

"The extraordinary income from payment of Neymar Jr.'s buyout clause (222 million euros) has been compensated in next year's budget through improved commercial and sponsorship revenue, media rights, exploitation of the stadium and transfer of players," the club said.

One of the main reasons for the increase in revenue was the new cycle for distribution of UEFA payments for the Champions League, Barcelona said.

Last month, Real Madrid said its operating revenue for 2017-18 reached 750.9 million euros. The figure, which doesn't include gains from the transfers of players, represents an increase of more than 76 million euros, the largest rise for the club in a financial year since 2000.

Real Madrid said it has no debt.

Earlier this year, FCB extended its sponsorship agreement with Turkish electronics company Beko worth a total of 57 million euros for the next three years.

As a result of this agreement, it said, the Beko logo will be appearing on the front of the first team training kit, as well as on the back, as it has done until now. The logo will also remain on the left sleeve of the playing strip as has been the case since the 2014/15 season.