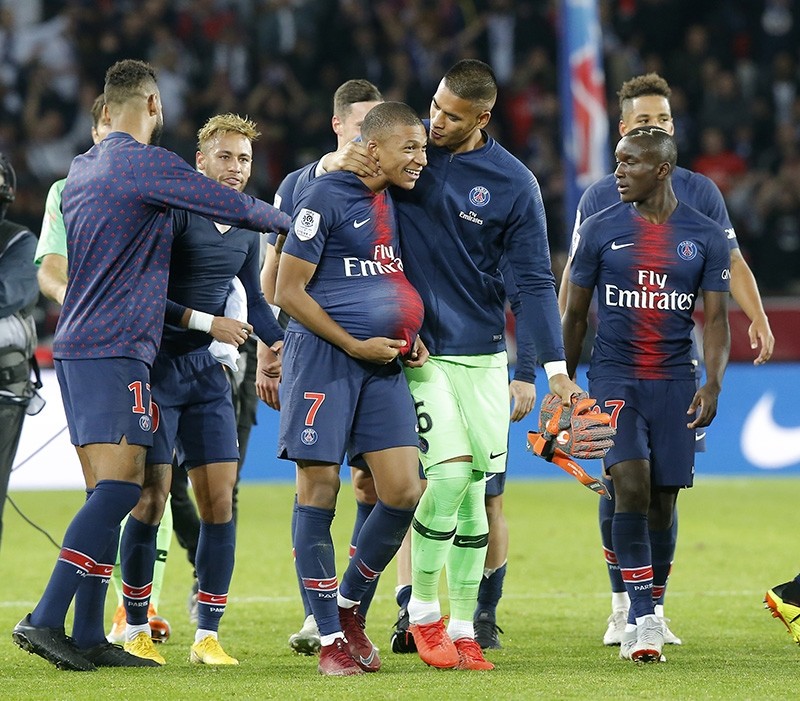 Kylian Mbappe tore Lyon to shreds on Sunday with four goals as a 5-0 thrashing at the Parc des Princes saw Paris Saint-Germain set a new French top-flight record of nine straight wins to start a season.

Thomas Tuchel's Ligue 1 leaders broke the 82-year-old record of eight consecutive wins set by Olympique Lillois in 1936, having equaled the mark with their 3-0 victory at Nice last weekend.

"Fantastic, incredible. It was super hard in the first half, it was a crazy match," PSG coach Tuchel told Canal+.

A Neymar penalty gave PSG a ninth-minute advantage, but Presnel Kimpembe was sent off just after the half-hour mark to give Lyon hope.

Bruno Genesio's side threw away their man advantage, though, as Lucas Tousart was dismissed, and after missing a string of chances, the sensational Mbappe capped an virtuoso display by scoring four times in 13 minutes to seal history for PSG.

The capital-city giants, bidding for a sixth title in seven seasons, are already eight points clear of second-placed Lille at the top of the table, with Lyon five points further back in sixth.

Lyon endured the worst possible start to the match, as star man Nabil Fekir was forced off injured in the seventh minute, and the hosts were awarded a spot-kick just seconds later.

Mbappe raced to reach a loose ball, and visiting goalkeeper Anthony Lopes needlessly charged off his line to bring down the teenager.

Neymar stepped up and sent Lopes the wrong way with a stuttering run-up to score his 11th goal of the season.

Lyon responded well, though, with veteran goalkeeper Gianluigi Buffon having to shovel a Memphis Depay free-kick over the bar, before Di Maria was fortunate not to concede a penalty for handball.

The reigning champions thought they had got lucky again when Kimpembe was only shown a yellow card for a nasty tackle on Tanguy Ndombele, but with the young midfielder lying stricken on the ground, a video review resulted in the center-back's punishment being upgraded to red.

But Lyon shot themselves in the foot on the stroke of half-time as Tousart tripped Mbappe inside the PSG half and was given a second yellow card.

OL should have equalized early in the second period, but Maxwel Cornet contrived to miskick with the goal at his mercy.

Cornet, who came on for Fekir, almost scored in bizarre circumstances shortly after, as a Silva clearance ricocheted off his back and bounced back off the base of the post.

Mbappe almost put PSG out of sight three times in the space of five minutes -- powering clear after Cornet's unwitting effort and drilling against the far post, seeing Lopes dive at his feet as he ran through one-on-one, and shooting too close to the Lyon 'keeper.

But the World Cup-winner's persistence finally paid off in the 61st minute as he latched onto the ball inside the area after Neymar had burst forward, turned his man and smashed the ball in off both posts.

Confidence was coursing through PSG, and the floodgates opened as center-back Marquinhos drove into the box and squared for Mbappe to stab in his eighth goal of the campaign.

Neymar soon sent the 19-year-old bearing down on goal yet again, and Mbappe lofted the ball into the net to complete an incredible eight-minute hat-trick.

He was not done there, though, as he pounced to slam home his fourth with 16 minutes left after Neymar had seen a low shot blocked.

Leonardo Jardim's Monaco, runners-up to PSG last season, remain winless since the opening weekend and above the automatic relegation spots only on goal difference.

Elsewhere, ex-Japan coach Vahid Halilhodzic saw his Nantes side beaten 3-0 at Bordeaux on his return to French football, while Kostas Mitroglou and Florian Thauvin scored as Marseille climbed to third following a 2-0 victory over Caen.