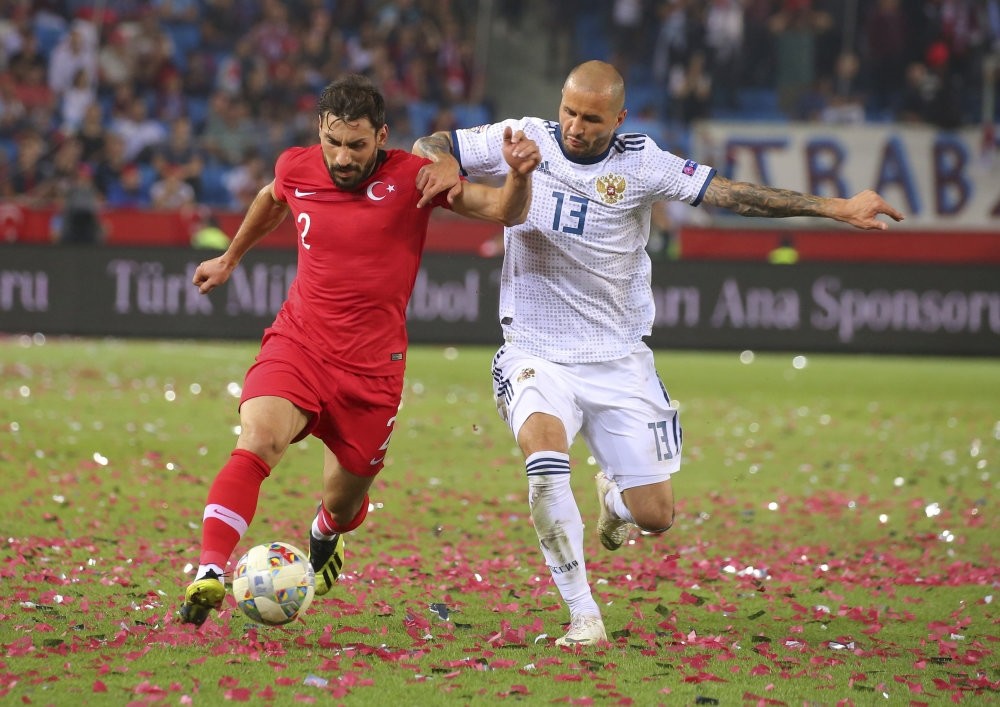 u015eener u00d6zbayraklu0131 (L) tries to dribble past Russia's Fedor Kudryashov, right, during the UEFA Nations League match between Turkey and Russia in Trabzon, Sept. 7.
by Daily Sabah with Wires
Oct 13, 2018 12:00 am

The Turkish national football team will play its third UEFA Nations League group match in an away match against Russia in Sochi on Sunday. In the previous matches, Russia beat Turkey 2-1 on Sept. 7 at home in the League B, Group 2 match. However, Turkey its way clawed back from a two-goal deficit to defeat Sweden 3-2 on Sept. 9 at Sweden's Friends Arena. Now, Turkish players look to keep this winning run against Russia and to get an advantage in the group standings. On Thursday, Turkey drew 0-0 against Bosnia-Herzegovina in a friendly match at home in the Black Sea province of Rize.

In the only game of the Thursday night in the second-tier League B, Russia drew 0-0 with Sweden in Kaliningrad. Russia, unbeaten against the Swedes since 1994, stayed ahead in Group 2 with four points, one more than Turkey and three ahead of Sweden. All the teams have played two matches. The group winner will move up to Group A, while the team at the bottom of the group will move down to Group C.

Elsewhere, European champion Portugal sparkled on Thursday despite the absence of its star forward Cristiano Ronaldo, defeating Poland to move a step closer to the last four of the UEFA Nations League. Portugal now has six points from two games, five points ahead of Poland and Italy. Only the group winner advances to June's last four. A draw between Poland and Italy in Chorzow on Sunday will guarantee Portugal as the group winner. Portugal plays a friendly in Scotland the same day. It was Portugal's third straight game without Ronaldo, who hasn't played an international since his transfer from Real Madrid to Juventus in the summer.

Israel's 2-1 home win against Scotland left all three teams in Group 1 of the third-tier League C tied on three points after two matches. Scotland is ahead on goal difference, followed by Israel and Albania. Israel hosts Albania on Sunday. In Group 4, Serbia stayed ahead with a 2-0 win in Montenegro, while Romania remained second with a 2-1 victory in Lithuania. In Group 3 of League D, Kosovo is top after a 3-1 home win against Malta, while Azerbaijan jumped to second with a 3-0 victory in the Faroe Islands.

The 55 associations were split into four leagues according to their rankings. The group winners in Leagues B, C, and D gain promotion, and teams that finish at the bottom of their groups in Leagues A, B, and C are relegated.