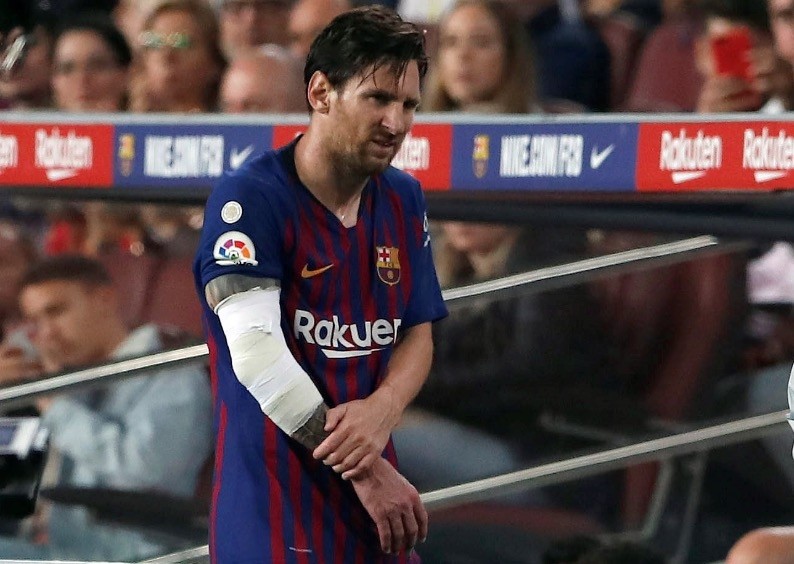 Messi leaves the pitch after sustaining an injury during the La Liga match between Barcelona and Sevilla at Camp Nou, Oct. 20.
by Associated Press Oct 22, 2018 12:00 am

Barcelona ended its slump and regained the Spanish league lead but there was little to celebrate as Lionel Messi broke his right forearm and will be sidelined for three weeks. Also, Real Madrid lost again while suffering its worst scoring drought.

Messi scored and walked off injured in the first half of Barcelona's 4-2 win over Sevilla at Camp Nou Stadium, while Real Madrid players and coach Julen Lopetegui were jeered off the field after they lost to Levante 2-1 at Santiago Bernabeu Stadium. Messi was taken to a clinic, and Barcelona said he broke the radial bone. At the least, he will miss the Champions League match against Inter Milan on Wednesday, and the clasico against Barcelona next Sunday.

"We will notice his absence," Barcelona coach Ernesto Valverde said. "But we've played without him in the past. We will be prepared to overcome this." Messi was trying to reclaim the ball when he ran into the back of a defender and fell in the 17th minute. Trying to cushion his fall, his right elbow bent badly and he was in visible pain. Doctors wrapped his arm with bandages and the playmaker tried to continue but gave up. Atletico Madrid, which drew at Villarreal 1-1, also was two back after nine matches. Real Madrid was four points behind Barcelona, in fifth place.