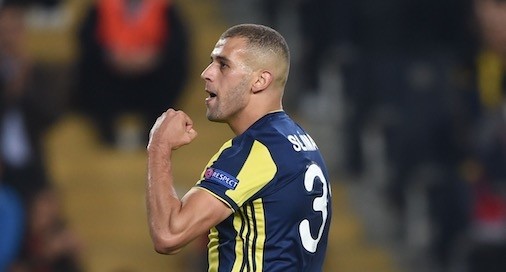 Going through a rough patch in the Super League, the two Istanbul powerhouses will look to lift spirits in the UEFA Europa League tonight as Fenerbahçe meets Anderlecht and Beşiktaş hosts Genk. The other Turkish team in the competition, Akhisarspor will travel to Sevilla

An under-pressure Fenerbahçe will be desperately looking for a win as it takes on Belgium's Anderlecht in the UEFA Europa League Group D match tonight. Fenerbahçe beat Spartak Trnava 2-0 with Islam Slimai's goals last time out on Oct. 4. The Canaries are now having difficult times in the domestic league, being at the 15th spot, just above the relegation zone. On Saturday they drew 0-0 with Demir Grup Sivasspor, not ending the poor run.

Anderlecht, on the other hand, will be looking to claim its first points in Group D while Fenerbahçe has won two of four previous meetings. The Istanbul powerhouse beat Anderlecht at home and away in the 2007/08 Champions League qualifying. On Nov. 8, Fenerbahçe will host Anderlecht while the other Group D teams Dinamo Zagreb and Spartak Trnava meet same day.

As for Beşiktaş, although it is not in a situation as bad as Fenerbahçe, the Eagles are also under pressure after some disappointing performances in the domestic league. It lost 2-0 against minnows Göztepe in İzmir on Sunday. With the defeat, Beşiktaş dropped down to fifth in the standings with 15 points. Every side in Group I has three points. Beşiktaş beat Sarpsborg then lost at Malmö. This will be the Genk's first match against a Turkish rival.

Beşiktaş, meanwhile, has won two, lost two and draw two matches against Belgian opponents. On Nov. 8, Genk will host Beşiktaş for the return match while its rivals Malmö and Sarpsborg meet in Sweden.

Compared to the Istanbul duo, Akhisarspor faces a more difficult challenge as it travels to Sevilla. Sevilla has always progressed through to the knockout phase, winning the competition in 2013/14 and 2014/15. The hat-trick triumph of 2015/16 came after they had crossed over from the UEFA Champions League during the winter. The Spanish side has won all four European home games this season. It has now won 13 straight matches at home to non-Spanish oppositions in the UEFA Europa League, qualifying included. Akhisar qualified for their first European campaign – and an automatic place in the UEFA Europa League group stage – with a shock 3-2 win over Fenerbahçe in the 2018 Turkish Cup final.

Elsewhere, Chelsea, possibly without the influential Eden Hazard, will host BATE Borisov of Belarus. Arsenal, after sealing an impressive 10th straight victory at home to Leicester in the Premier League on Monday, will be the team to watch in Group E.

The Gunners and Sporting sit on six points apiece after two games, with Azerbaijan's Qarabag and fellow struggler Vorskla of Ukraine still pointless.

If Arsenal needed more reason to believe in their chances of going all the way, they need not look far. As the coach of Sevilla in 2013-2016, Emery led the Spaniards to three consecutive Europa League titles. Sporting, who won 2-1 away to Loures in the Portuguese Cup with Nani and Bruno Fernandes both on target, should be fresher having played Saturday.

As Marseille prepare to face Lazio, the French side will be hoping the past experience of coach Rudi Garcia pays dividends as it bids for a first win of the group stages following a 2-2 draw at Apollon Limassol. Gracia joined Marseille from Roma, where he faced Lazio five times in the capital-city derby and never lost.