Galatasaray to face Schalke in Champions League round 4 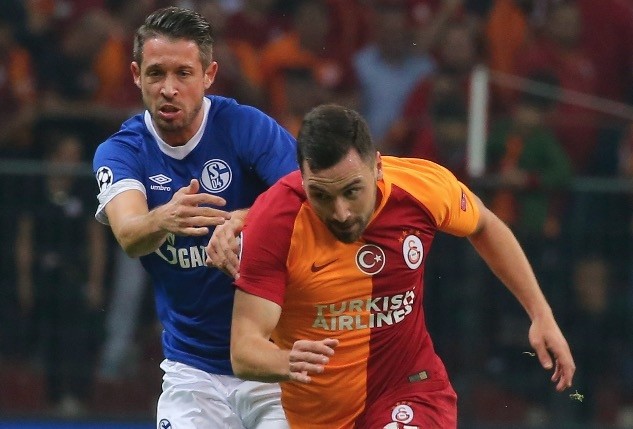 Sinan Gu00fcmu00fcu015f was angry at his coach Fatih Terim for pulling him out early in the 61st minute of the last outing against Schalke two weeks ago in Istanbul.
by Daily Sabah with Wires Nov 06, 2018 12:00 am

The fourth week of the UEFA Champions League is set to start today. Turkish champion Galatasaray and Germany's Schalke 04 will play the return leg match of a 0-0 draw on Oct. 24

Turkish league champions Galatasaray will play Germany's Schalke 04 today in the UEFA Champions League. The match will kick off at 11 p.m. local time (2000 GMT) at Schalke's Arena AufSchalke-Gelsenkirchen Stadium. The sides drew 0-0 in the first match in Istanbul on Oct. 24. Galatasaray last won at Schalke in the 2013 Round of 16. The Lions' other rivals in Group D, Portugal's Porto and Russia's Lokomotiv Moscow will meet today at Estadio do Dragao in Porto. The Portuguese team won 3-1 in Moscow last time out. Porto is at the top of the group with seven points followed by Schalke with five, Galatasaray has four points and Lokomotiv Moscow has none. So far, Galatasaray has played 274 matches in UEFA competitions, winning 99 games and losing 103. To date, the UEFA Champions League Cup has proved elusive for Turkish clubs, with the Lions being the only Turkish club to have won the UEFA Cup in 1999-2000 and the 2000 UEFA Super Cup.

Elsewhere today in the Champions League, Atletico Madrid hosts German rival Borussia Dortmund in a Group A match. It was a measure of how hard Atletico Madrid was hit by their 4-0 defeat to Borussia Dortmund two weeks ago that they were still talking about it after their next home game. In the other Group A match, Monaco and Club Brugge will meet in Monaco. Thierry Henry is still waiting for his first win since taking charge at Monaco after his team fell to a seventh league defeat of the season in a 1-0 loss at Reims. Henry will now switch his focus to Monaco's flagging Champions League campaign, with one final chance to revive its hopes of reaching the knockout stages when it hosts Club Brugge.

In Group B, Tottenham Hotspur will host PSV Eindhoven. Spurs were rocked by an injury to Mousa Dembele, particularly with one eye on a must-win Champions League clash at home to PSV Eindhoven today. In the other Group B match, two powerhouses Inter and Barcelona will meet in Italy. Lionel Messi has returned into Barcelona's squad for the Champions League match at Inter Milan from an arm fracture and could possibly even feature in today's game. Messi was included in the list of 22 players on Sunday by Barca who can advance into the knockout stages. Doctors are yet to declare him fit but that may happen in the final countdown to the game.

In Group C, Red Star hosts Liverpool at Rajko Mitic Stadium in Belgrade today. Henderson and Keita are a doubt for the Champions League trip to Red Star Belgrade due to injuries. In the other Group C match, Paris Saint-Germain will make their crucial Champions League trip to Italy to face Napoli today. A defeat could leave Thomas Tuchel's side on the brink of an early exit.