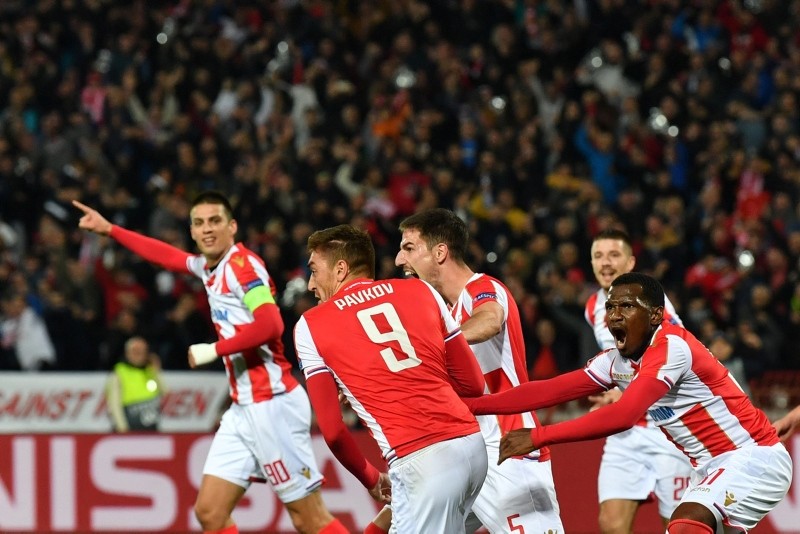 Milan Pavkov scored in the 22nd and 29th minutes — his second goal a rising strike from 25 meters — to bring Red Star back into contention to advance to the knockout stage in its first appearance in a Champions League group stage. The Serbian team last played in the European Cup in 1991 as holder.

Liverpool, last season's finalist, arrived in Belgrade in first place in the group but will be overtaken by either Napoli or Paris Saint-Germain, who meet in Naples later Tuesday.

The English club has now lost both of its away games in the group stage, having been beaten 1-0 at Napoli last month, and its fearsome attacking unit again lacked a cutting edge in Belgrade against an opponent Liverpool thrashed 4-0 two weeks ago at Anfield.

Instead, it was Pavkov who impressed in front of goal, leaping highest at a corner to head in a right-wing delivery from Marko Marin and put Red Star ahead.

The striker then showed another side of his game, shrugging off Georginio Wijnaldum to get the ball onto his right foot and smash a fierce shot past goalkeeper Alisson.

Daniel Sturridge, who started up front in place of Roberto Firmino, sidefooted over the bar from close range in the first half and Mohamed Salah saw his shot strike the post after halftime. A deflected cross from Andrew Robertson also bounced onto the crossbar after the break.

Red Star moved onto four points, two behind Liverpool, and its home form means it still has a chance of a top-two finish. Red Star drew 0-0 with Napoli in its previous home game.

Liverpool finishes the group with a trip to PSG and a home game against Napoli.