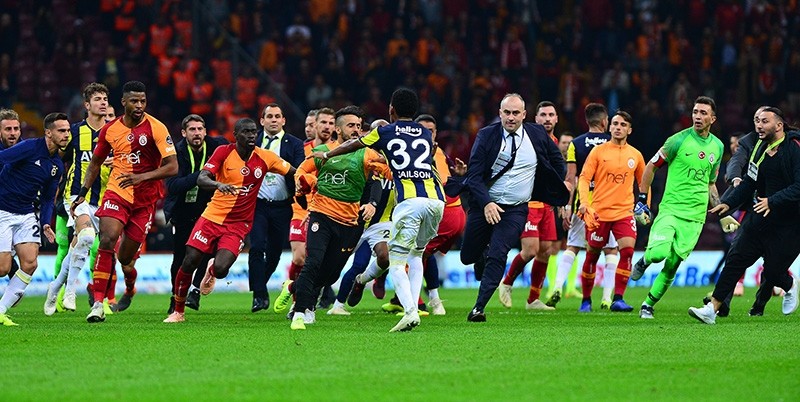 Turkish Football Federation's (TFF) Professional Football Discipline Board (PFDK) announced Thursday it will ban Galatasaray's Technical Director Fatih Terim from seven matches and the club's trainer Hasan Şaş from eight matches over a scuffle that followed a derby against arch rival Fenerbahçe that ended in a draw Friday.

Terim was also fined 65,000 Turkish lira ($11,900) for insulting the referees and making unsportsmanlike comments after the match. Former international and Galatasaray winger Şaş was handed the match ban and a TL 20,800 fine for attacking a player on the opposing team.

PFDK decided not to punish Galatasaray Club President Mustafa Cengiz, who was brought up for review over a statement made online after the match. The club's second chairman Abdurrahim Albayrak was issued a warning for going onto the turf at the end of the match.

Arch rivals Galatasaray and Fenerbahçe drew 2-2 in a heated derby match Friday. The lions dominated the first half, bringing the score to 2-0 early into the second half. Fenerbahçe, caught up with two of its own goals, however, ending the match in a draw.

After the match, Galatasaray's Belhanda and Fenerbahçe's Soldado ignited a brawl, resulting in three red cards and a yellow card being doled out.

After officials reviewed the fight on the Video Assistant Referee (VAR) system, Fenerbahçe's Jailson and Soldado and Galatasaray's Ndiaye were given red cards while Galatasaray's Belhanda received a yellow card.

Galatasaray is currently in second in the Turkish Super League standings with 20 points, while Fenerbahçe is weathering a tough season that has left it in 15th place with 10 points, suffering the worst start to the league in their history.

The incident again brought public attention to violence in Turkish football, both inside the stadiums and outside, and involving top figures.

In July 2017, Terim was forced to resign from his post as the Turkish national football team director after fighting with a restaurant owner in Aegean coast resort town of Alaçatı.

More recently in October, midfielder Arda Turan was involved in a highly-publicized fight with pop singer Berkay, allegedly hitting on Berkay's wife despite being married himself. He then broke the pop singer's nose and threatened the couple in the hospital where they went for treatment.

In 2017, Turan was forced to take a break from his career after being sacked from the Turkish national football team squad by Terim upon verbally and physically assaulting a Turkish sports journalist on a plane that was carrying the national team from Macedonia's Skopje to Italy's Trieste. Turan was banned by the PFDK for a record 16 matches in May, which was later commuted to 10 matches, for attacking the assistant referee during the match between Medipol Başakşehir and Sivasspor.