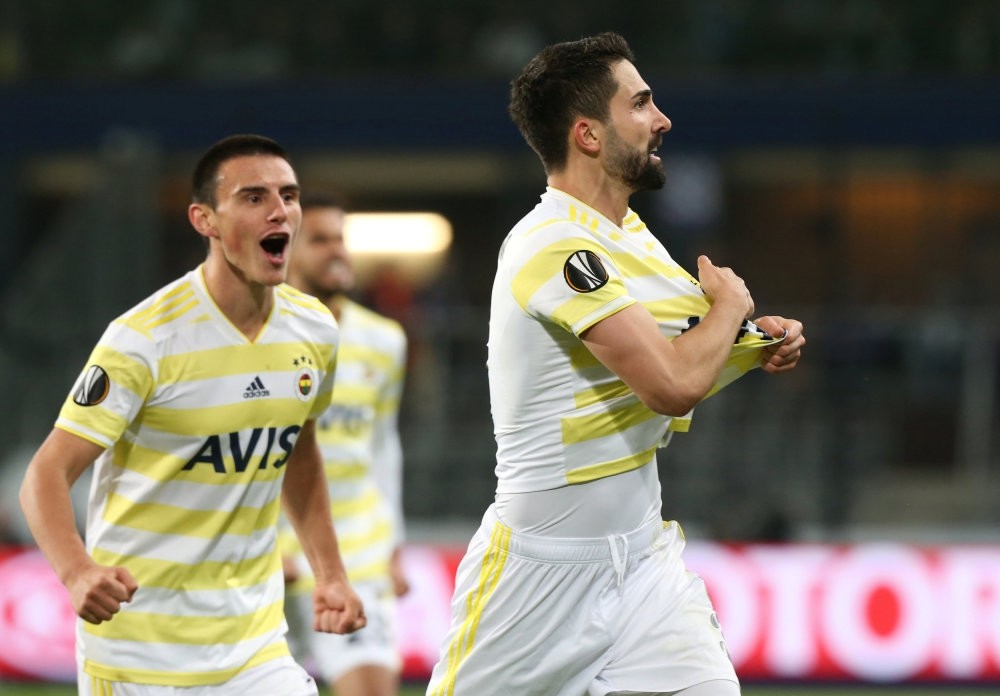 Fenerbahu00e7e's Hasan Ali Kaldu0131ru0131m celebrates scoring their second goal with Eljif Elmas during the match against Anderlecht on Oct. 25.
by Daily Sabah with Wires Nov 08, 2018 12:00 am

Game week 4 of the UEFA Europa League will kick off today, with 24 matches played across the continent.

Three Turkish teams are playing in this year's competition. Turkish giant Fenerbahçe will face Belgium's Anderlecht, Beşiktaş will play against Norway's Malmö and Akhisar will face Spain's Sevilla this week.

Earlier on Oct. 25, Fenerbahçe rescued a 2-2 draw at Anderlecht. Beşiktaş was thrashed by Genk 4-2 in Istanbul and will now be eyeing revenge today. Same goes for Akhisarspor as the Anatolian team took a heavy beating from Sevilla, in a 6-0 thrashing in Spain two weeks ago.

Meanwhile, Turkey's only team in the Champions League, Galatasaray continued to disappoint its fans. Germany's Schalke 04 defeated the Lions 2-0 Tuesday in the UEFA Champions League. The sides drew 0-0 in their first match in Istanbul on Oct. 24.

Porto is top of the group with 10 points, followed by Schalke with eight, Galatasaray with four and Lokomotiv Moscow with no points.

Meanwhile, the Europa League group stage reaches a crucial stage today as 10 teams look to progress with two matches to spare and another 11 are battling to keep their hopes alive. Premier League sides Chelsea and Arsenal, two of six teams with perfect records, are among those hoping to advance, as are the Bundesliga trio Eintracht Frankfurt, Bayer Leverkusen and RB Leipzig. Lazio, Zurich, Salzburg, Dinamo Zagreb and Real Betis could also progress to the last 32 if results go their way.

Group I: Malmö vs. Sarpsborg, Genk vs. Beﬂiktaﬂ

Group A: Leverkusen vs. Zurich, Ludogorets vs. AEK Larnaca

Group B: Rosenborg vs. Salzburg, Celtic vs. Leipzig