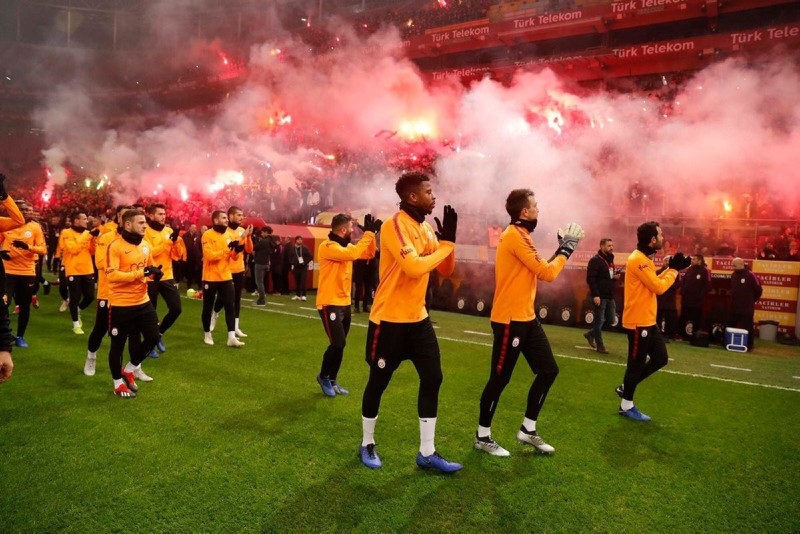 Saturday's training at Galatasaray's home ground Türk Telekom Stadium in Istanbul's Seyrantepe neighborhood was watched by 40,541 fans chanting and flaring torches. The club announced that it was a world record for a paid training session.

Fans with season tickets, shoppers from the club's official GS Store chain and Sunday visitors of the club's museum were admitted to the session.

The fanfare reached its climax as Galatasaray players entered the pitch at 7:05 p.m. (19:05), in a reference to the club's foundation year. Flare smoke covered the entire stadium and delayed the training session.

The club administration, which has faced fines over comments against the Turkish Football Federation (TFF), referees and November's eventful derby against Galatasaray's archrivals Fenerbahçe, toured the stands before the session. The fans protested the TFF and the Central Referee Board (MHK) and called for the resignation of their administrations.

Club President Mustafa Cengiz has recently been deprived of his rights by the country's football watchdog, the Professional Football Discipline Board (PFDK), for 150 days.

Galatasaray Coach Fatih Terim, who had called for the session, thanked fans for their huge support despite the cold weather.

Sunday's derby is crucial for both teams contending for the title as of week 14. Last year's champions Galatasaray, currently ranking third in the Super League, aim to reduce the six-point-gap with leaders Medipol Başakşehir after their loss against Sivasspor. The derby is also important for Galatasaray to get over their elimination from the UEFA Champions League. Meanwhile for Beşiktaş, currently ranking sixth, a win over Galatasaray is crucial to continue their assertion.